I was taking to another astrologer yesterday, he asked me which method I favored when it came to looking at relationships. Synastry or Composite charts. Then Britney asked what the difference was, so here goes:

I use both methods because they show different things. When you compare one chart with another, you see how two individuals interact. When you actually put the charts together, you see how the relationship acts. And I can illustrate this with a story.

I was once involved in a very difficult relationship. As for the synastry…my Mars was square his. If you read about Mars square Mars between charts, some sources will tell you this is good for sex. You know. You’re at cross purposes with the other which can inflame you.

Considering this you can see what they’re talking about. Put the people together and war breaks out. It might not be so good in the middle of the mall, but for sex? Well there is a lot of energy between the two people so what you don’t have is inertia! Sparks do fly but in every day life this aspect between charts causes a lot of problems.

For one thing we could never do anything together. Whenever I wanted to go left he wanted to go right! We simply could not harness our energies to get anything done and this was apparent in even most mundane tasks. Moving something heavy for example.

If we wanted to move the couch…well, we’d get it done but not without bashing knuckles into walls, etc. Not without getting pissed off and frustrated because when I went one way he’d go the other. So that’s how synastry works. Your planet hits mine and there is a result.

Now the composite chart or the chart of the “relationship” had a Grand Cross, which is basically a train wreck and it was uncanny to me, how this played. When we would go out somewhere together, in essence we would be this freakish chart, personified and up walking around and people can see that.

Think of the couples you know. This couple is “fun”. This other couple is “unhappy”. This third couple is nervous and jerky, or whatever. And the energy of the couple is different than the energy of either of the individuals, right? If you talk to her when she’s not with him she’s much different and vice-versa. But regarding the composite chart with a Grand Cross and here is what I noticed:

Wherever we went, and whoever we ran into, they would only interact with one or the other of us. We would encounter someone and they would look at him, then back at me, then back at him, and then back at me, eventually settling on one of us and addressing them, exclusively. It was as if people just couldn’t relate to us as a couple because the energy we created was just too frenetic. 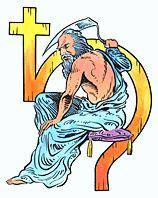 I found this a living hell because think about it. If I wanted to have energy that anyone could stand, I had to be standing not next to him and he was in the same boat. So the other day, when someone asked on a message board, “What do you think of a composite with a Grand Cross in it?” I said, “Run!”

And this the kind of thing that gets me in trouble like the Saturn filtering of people I wrote about last month, but jeez louise. You get caught in something like this and it’s very difficult to get out…

Do you notice that two people paired up have a distinctly different energy than each person as an individual? And do you feel you come across differently when you’re with your friend or partner than you do when you’re on your own?


To update, the soldier and I also have a composite grand cross. This series is 4 pieces long and when I’ve finished running it, I will update with the new things I have gleaned on the topic..