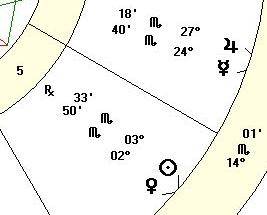 I came across this stellium in Scorpio, in effect between October 23rd and 30th. It’s quirky and hard to read.

I say that because Mercury and Jupiter are conjunct. Jupiter is all about spreading information. Mercury in Scorpio describes secret information.  This makes me think of dirty laundry being exposed.

I am not expressing or withholding support for either phenomena nor remarking on the veracity of the information being generated. But these things great examples information being uncovered (Mercury in Scorpio) and published / spread around the world (Jupiter), be it real, manipulative or both!

Venus is considered a benefic but the planet is in detriment in Scorpio.  Venus is also retrograde but she’s still Venus. If I had the option to have Venus conjunct my Sun, I’d invite her on board.

I consider Venus to be a kiss. Venus in Scorpio; the kiss of death?

You see what I’m getting at here. This stellium in very hard to read. If you’ve ever delved deeply into anything, you pro baby realize it can get pretty murky.

We’re all going to experience this but if your birthday falls during this time period, this stellium will show up in your Solar Return chart.   That means you’ll be messing with this secret/not secret stuff all year long. A Solar Return report should help. It’s like having a cheat sheet or some kind of flashlight as you’re plunged into this type arena.

For everyone else – which house(s) in your chart will be affected by this stellium?