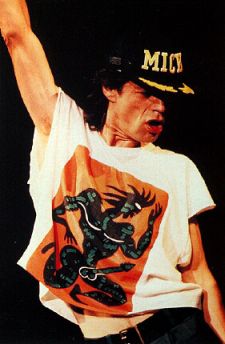 This is a true story. It happened during a Uranus transit to my ascendant… I was about 29. Vintage astrology blogging here, I wrote this in 2002.

When Uranus transits a point in your chart, things speed up. There is much experimentation and fast, sudden change. The point is to revolutionize the part of the life indicated.

In this case, we’re talking about the ascendant, or the appearance. The ascendant shows how you present, your first handshake, your façade…  you get the idea. With natal Uranus in then 7th house – the transit plays on the love and beauty front and here is what happened:

I was in the Art Museum with my pal, Kay. Kay was the a double Aquarian that bocked like a chicken to pick up a man and only shaved one of her legs. A man came rushing up to us, he looked like Mick Jagger . He was obviously gay in his tight black pants and his purple shirt. He’s got to be a Leo, that’s what I thought.

“Yes! Marvelous,” he said. “It would be marvelous! Can I cut your hair? You will love it, dahling. You will love how I make you look!”

“Huh?” I said stupidly. I’d not been in town very long. “I don’t know,” I said, wondering if he was serious.

Well, he was serious. Not only did he want to cut my hair; he wanted to cut it right then as in right this minute, in the middle of the art museum.

I’d not have believed it but he pointed up ahead and sure enough he has an impromptu salon set up rignt in the middle of museum?  There is a proper barber chair, elevated on a red platform no less. Gotta love that.

His voice was  dramatic and kind of breathless.  “I am a famous stylist! I’m WONDERFUL. So? Can I cut your hair? You will be fabulous, I promise.”

I looked at Kay for a vote and she winked and nudged me. “Must be that Uranus whomping you on the head,” she said teasing me. “You said it would change your appearance. Well here’s your chance. I say go for it!”