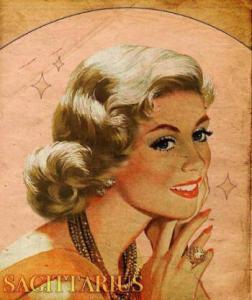 The client is an Aries rising with Sagittarius, including Jupiter in the ninth house. She’s a candid, fiery teacher and she loves it when I write about her. For reference, this gal is also, The Sore Winner.

I’ve worked with this gal awhile.  We interrupt each other a lot, to the point where it’s funny but invariably the sessions go well as she promises to let me talk and I promise to “add value”. You can picture two women with megaphones strapped to their faces. That’s us.

The last time we talked, this gal in a power struggle at her job. I felt she might get a fast and favorable result if she opted to communicate with a certain nuance.

I could plainly see this ability in her chart though her skill is underused if it’s used at all. It’s overpowered by the Fire in the chart.

I’m talking about Mercury in Scorpio in the 8th and some Pisces.  If you know a bit of astrology, you can see right there, how she would take the one route, especially if she’s mad or challenged.  She’s just going to be bigger than whoever but depending on who she might be up against, this is not necessarily the easiest way to win.

I gave her a sentence to use with this gal. One sentence! It was innocuous and agreeable but it also contained a threat that I felt sure her foe(s) would pick up on.

“I don’t want that either.”

The second sentence is her line. I think they know if this gal is pushed, they will get the thing they don’t want because when you mess with this chick’s integrity, she will literally fight you to the Supreme Court.  And she’s got some Virgo so she will have every detail covered and there will be no blind spots.

I actually think she is unbeatable. But why go through all that when you can stop the thing in it’s tracks with five words and a poker face?

Is there something in your chart that is underused?  Transits reveal things like this and it’s glorious when it happens. Think about this gal with her Sagittarius arrows, shooting a barrage of them into her enemy.  Yes, she can do that but it’s much easier to flash a knife, never mind no one gets hurt.

Is there something like this in your chart? What is it?