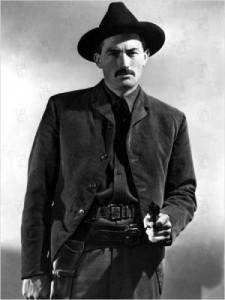 With the full moon in Leo, squaring Uranus, I’m pulling up creative/theatrical (Leo), uncommon type, astrology (Uranus).  This is from 2009.

I have meant to watch, The Gunfighter with Gregory Peck for almost 25 years. I finally got around to it.  The timing was perfect I suppose.

I became interested in seeing the movie in the mid-80’s when Bob Dylan referenced it in his song, Brownsville Girl on the album, “Knocked Out Loaded”. I was captivated with this album in spite of the fact it was almost universally panned and if I were to name the reason I never actually saw the movie, it would be because Dylan seemed to sum it up so well:

“Well, there was this movie I seen one time,
About a man riding ‘cross the desert and it starred Gregory Peck.
He was shot down by a hungry kid trying to make a name for himself.
The townspeople wanted to crush that kid down and string him up by the neck.

Well, the marshal, now he beat that kid to a bloody pulp
as the dying gunfighter lay in the sun and gasped for his last breath.
Turn him loose, let him go, let him say he outdrew me fair and square,
I want him to feel what it’s like to every moment face his death…”

I had put the seeing of this movie off long enough and I set out to hunt it down. I thought my husband might be interested. He likes westerns and we both have become increasingly interested in watching old movies. 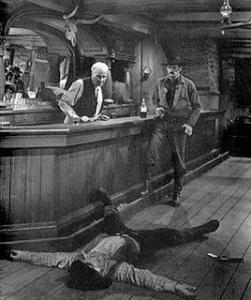 I also thought he’d relate to what I imagined  the movie would be like, on account of  his being an ex-green beret. He’s explained in the past he never talks about his career or tells anyone he was in Special Forces because when he does, they don’t believe him and if they do believe him, they want to fight him.

This seemed counter-intuitive to me the first time I heard it but after observing him for all these years, I learned what I should have known from day one:  He knows what he’s talking about. He popped the movie in the player.

Right away someone got shot. It had to be that way because the character had to be established. Some dipshit comes into the bar and knowing full well that it’s Jimmy Ringo standing there. He takes him on and is shot dead.

“That’s exactly what it’s like,” my husband said.” “You have a reputation and that’s what happens.”

“Reputation for what? What is my reputation?” I asked.

“On your blog. I don’t know what your reputation is. I don’t read your blog but I know you have one.”

I didn’t answer because I was trying to comprehend how he would associate me with the gunfighter rather than himself. Did he not see himself? Did he feel we had a reputation in common? I didn’t ask because the movie was compelling. It engaged me completely by being smart and beautifully filmed and acted. By the time it was over I was thinking I’d just as soon never seen a current movie again.

If that sounds weird to you, my friend, Ben does this and always has. He refuses to see any movie filmed later than the early 60’s. He says they are lousy and insulting to his intelligence and while I’d have hated to have missed the Godfather or Apocalypse Now, I am beginning to see his point.

By the time the movie ended I could totally relate to The Gunfighter archetype. I could appreciate his predicament and his wisdom in passing the baton or the hot potato or whatever it is he had. He passed the burden to the younger man. I could also relate to his not minding dying. Mostly I was just glad I had a peer.

I’ve written about this before. When I first in touch got in touch with my husband in 2003, I wrote of my experience on an astrology mailing list.  Some gal was kind enough to convey her read on the situation which was pretty daring of her in hindsight. My husband was seen as a dark figure at the time. She pointed out, I sure seemed to like the black dog.   She said that I appeared to be having the time of my life with him and so I was.

And so I did when I was a teenager, and so I do now.

There is a principle in Vedic astrology, when a chart has indicators that make marriage difficult, this can be resolved by partnering with someone who has the same indicators. You are not supposed to mix Vedic with Western astrology but I think this idea crosses over.

That is, if you’re a gunfighter and you find another gunfighter… or if carry the shadow for the collective and you find someone who has the same job, then life can be pretty nice and so it is.

What do you have in common with your partner?