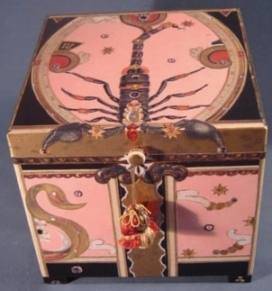 “I’ve been following your blog for over a decade now, and I’ve thought about this subject a lot & your comments throughout the yrs about Pluto super yin energy. I’ve seen it in my own life. I can remember times when I was a kid and I would laser beam other kids at the beginning of the school year that I thought I’d want as my friend, and next thing you know they’re not only my friend but my best friend.

However, I’ve lost my grit off and on in my adult years, as though I’ve lost awareness of my own power. I wanted to write you in regard to your comments in this article & about the sabotage of using masculine tactics when a person has a magnetic ability to attract…”

How A Scorpio Woman Attracts

“Do you have examples to offer of how one might pull in? And, what if the chart is contradictory like my Moon-Venus stellium in Aries? My chart is Mars-ruled in every direction, but I have Pluto Rising in Scorpio with an 8th house Mars, so indeed I know I have this power within me, but maybe all my Mars has tripped me up?

I think examples (which may seem obvious) could be really helpful to people, and if anyone can offer them, I feel sure you could.”

You’re asking for two things here that I can discern.  You want examples of how Pluto/yin energy works and you want to know how to work with a yin/yang combo in a natal chart. Okay!

As for the Pluto deal, it’s a simple phenomena. The less I write, the more people hire me. This happens because I’m a source of energy.  When the source shuts down, people come looking for it.

As for being powerfully yin and yang, I ran across something that Caroline Casey wrote in her book, Making The Gods Work For You, published in 1999. She was recalling a seminar or a retreat of some kind, she’d attended.  They did an exercise where they went out in the woods and acted aggressively. I know this sounds boomer-hippy and I’m sure it was. However, there is an idea here…

The group spent three days howling or punching or whatever it was they did. They called this “thrusting” which is a nice sexual word.

After three days of “thrusting”, they spent the next three days, completely relaxed.  They were to wait, passively and see what came back to them.

I thought this was pretty interesting and while I don’t time anything, I have been living this way since. I thrust, I relax. What comes back? Clients.  This suits my chart and I hope it helps you find what suits yours.