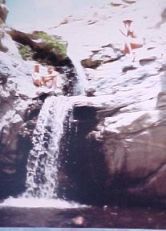 I wrote in the forum:

“…I walked away from my childhood home when I was 15 years old, wearing a sundress and a pair of rubber sandals that cost 33 cents (3 for $1). I did not have a dime…or a purse for that matter. I left on impulse, too. No planning, not a stitch.

I literally wanted to go and three minutes later I left. I KNEW I would make it. I had a back up plan (die) but I really knew I would be able to pull it off and I did…”

Reading this, it seems I am quite fearless. This is true to a large extent. I have no fear of dying whatsoever. I haven’t since I was very young. Consequently when I walked away that day, I did not feel afraid, I felt thrilled. I felt exhilarated. I was off to have a challenge.

But then I realized there are all kinds of nebulous things (and people) I am afraid of. For example, if you are a vicious type, you concern to me to no end. When I considered this, I realized by fear is described by the Saturn Neptune signature in my chart.

Neptune often displays an alarming lack of judgment. Do you know when I left that day, I walked right out to the highway in the middle of the desert, stuck my thumb out and promptly got into a car with five men and not a concern in the world?  My faith (Neptune) in what I was doing was solid (Saturn). I felt as if I was acting in concert with God; doing the right thing, so of course everything was going to be okay. Fear (Saturn) was erased (Neptune). It was simply non-existent.

On other days I might be completely undermined (Neptune) by fear (Saturn) and the fears are almost always baseless which would be the hall of mirrors effect.  Supported by nothing and undone by same.

At this age I have an advanced understanding of the phenomena and a myriad of ways of coping or compensating. I thought was something worth bringing up as Saturn leaves Virgo. Thinking about fear!

You can be scared into submission for example, frozen by fear.  But you can also be reckless and wind up dead in a split second.

What is the nature of your fear? Where is Saturn in your chart?

pictured – that is me, jumping from a cliff. Thrilled, of course.