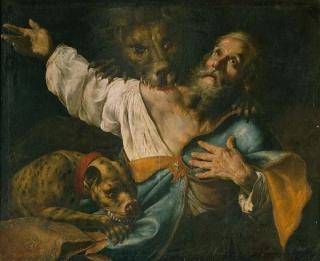 Pluto will turn retrograde on April 24th at 23 degrees Capricorn. Think about falling back, for real and deeply.

That sentence is awkward on purpose. Here you are slogging through the mud, you may even be stuck something more akin to a sewer. Now you’re supposed to fall back into it?  There is nothing comfortable about it.

Less than a week later, on April 29th, Saturn will turn retrograde at 20 degrees Capricorn. If you thought you were going to be able to stand your ground, this will be the “two” in the one-two punch. Many people will be knocked down.

This reminds me of Joseph Campbell’s quote, “If you’re falling, dive.”  But when I read that quote, I think of some graceful swan dive. In this case, we’re talking about something a lot more gritty and dark.

If you have Capricorn in your chart, you’re probably familiar with the concept of being “punch-drunk”. It’s the point where you’ve been hit so many times, you can’t feel it anymore. I have a lot of experience with this, both literal and figurative. When it happens to me today, I dive in one way or the. I leave the damned ring at my earliest opportunity!

Now that I have sufficiently scared everyone, let me state clear, I am Saturn-Positive!  Once you’ve hit the deck, either by your own action or in reaction to some blow from the outside, it’s not as if nothing good comes from it. I made this clear with this post:

How To Deal With Saturn Retrograde In Capricorn

As for the dates and such, here you go:

I recommend, you focus on Saturn because the issues that arise under Saturn transits are generally something you can control in some way, to at least some degree.

If you have planets in Cardinal signs between 12 – 25 degrees, you’ll be most affected.

I’m one of these people. You?