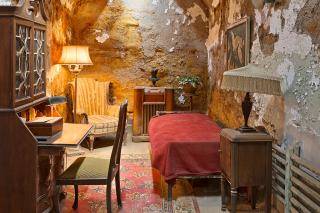 Perfectly lovely accommodations, except for the ghost.

We know, of course, that Saturn rules consequences. Saturn also rules delay. And what we find is that sometimes, even though we may get away with something in the moment, consequences have a way of finding us. To avoid straying into politics or current events, let’s look at an historical example.

Al Capone was nothing special. He was a hood in New York who had been expelled from school at the age of 14. But, in his work for a few local gangs, he attracted the attention of senior mob bosses. And when he was invited to Chicago in 1918 by none other than Johnny Torrio, who essentially ran Chicago, he jumped at the chance. He was on his way to the big time. Capone was such a model student, working his way through the ranks, that when Torrio decided to retire in 1925 following a near fatal shooting, he handed the reins to his entire crime syndicate to Capone. Capone performed admirably for a number of years before, as most of us are aware, being taken down for something as mundane as tax evasion. He went prison in 1932, where he spent the remainder of his life. 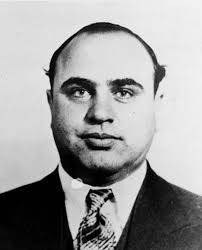 What’s fascinating here is the timing. Saturn travels around the zodiac roughly every 28 ½ years. And the timing of important Saturn-related events usually falls in increments of 7 years, representing a quarter of Saturn’s transit around the zodiac. And look at Capone:

Moves to Chicago and starts his gang career in earnest – 1918

Placed in charge of Chicago operations – 1925

Each of those major events took place 7 years apart. We see a career begin, peak, and end all within half a Saturn cycle. For 14 years he was untouchable, invincible, king of the world. And suddenly, for seemingly the most minute of offenses, it was over. He had a great run, but in the end Saturn caught up with him, as it does all of us.

And here’s the other interesting thing. In 1929, Saturn was moving out of conjunction with his natal Saturn and into conjunction with his natal Mercury. Shortly after the St. Valentine’s Day Massacre, Capone was briefly imprisoned for carrying a concealed weapon. During his time behind bars, he began to have horrible visions. He would be heard screaming as if he was being attacked, but when guards ran to check on him, he was always alone. He told the guards that “Jimmy” was after him, trying to seek revenge. He would repeat , over and over,“I just want Jimmy to leave me alone.” The Jimmy he was referring to was Jimmy Clark, one of the victims of the massacre. These visions that would plague him for the rest of his life were, for him, the worst punishment he ever received.

I don’t claim to know whether the visions were really ghostly revenge, guilt-induced nightmares, or simply the ravings of a syphilis-addled mind. What I do know is that Capone isn’t all that different from the rest of us. Whenever we do something wrong, most of us know it. Oh sure, we can usually justify or rationalize it, building walls in our minds to keep the guilt in check. But deep down, we always know.

So what happens down the line? You may be able to keep your guilt locked safely away for a while, but think about this: What if your mind is not always as strong as it is now? What if those walls (Saturn) begin to crumble? What if you can’t keep the guilt hidden any longer? What if you find yourself in a prison in your own mind?

Saturn can’t be stopped. He halts his march around the zodiac for no man. And while you may be able to escape his judgment for a while, even for years, he will always come to collect his due. So as Saturn is highlighted in the coming months, keep this in mind.  Make very, very sure that what you’re doing is right. Because even if no consequences come right away, that doesn’t mean they won’t. Far better to make the extra effort to do the right thing now than to answer Saturn’s call in 7 years.

Have you seen examples Saturn’s delayed consequences? How did it play out?