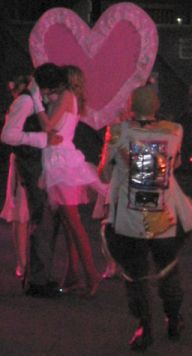 With Uranus in the 7th house, I have a lot of experience with togetherness followed by separateness followed by togetherness and my strong experience is that whatever was there initially will be there when the people reunite and this is for good or ill. You may be able to better manage strong feelings that are conjured up when you reunite with someone but the energy itself will still be there.

For example I feel the same way about the soldier as I did when I was a kid and I feel the same with him too, as far as physically when he is in the room. We fought like a cat and a dog within hours of meeting each other, both yelling at the top of our lungs and we still have bouts like this.

As another example, my sister cropped up after a number of years and we fell right into sync and into the same feelings and patterns and ways of communicating that existed when we shared a bedroom, 40 years ago.

If you had a troubled relationship with someone it is probably delusional to think you can reunite and not have the same misgivings but there is an important point to make. It matters whether the problem was “yours” or “ours” and I will use myself as an example.

When I was young, I used to throw men out. I literally would kick them out of the house whenever things got tense, sort of like throwing the baby out with the bathwater you hear about. I outgrew this in my early 20’s. Not to say I do not still have the impulse because I do. But I have learned not to act on it, how damaging it is, what it can cost you, etc.

That is an example of something that has nothing to do with the other person. To contrast, say you were with someone who tended to insult you or oppress you in some way. Maybe they blame you for their unhappiness and the like… in between the good times. Things like this are liable to be hard-wired and odds are overwhelming if your reunite, you will repeat the experience. Not that this should stop you!

I reunited with Scott at least 20 times over the course of 35 years, both of us knowing what the likely result would be or perhaps because we knew what the result would be! We’re both commitment-phobics who knew very well we could go in knowing we wouldn’t be in for long!

Ben and I have been friends for 25 + years and whenever the phone rings, the same feelings constellate and I think this stuff is good to know. With Saturn heading into Libra, it’s a good idea to learn everything you can about relating to others, particularly when it comes to limits and/or definitions for good or ill.

What does your experience show?