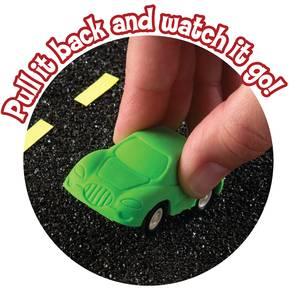 Mercury is currently retrograde and Venus is “fixin’ to go” in October. Jupiter, Uranus, Neptune and Chiron are retrograde now as well. As most of us know, planets don’t actually move backward, they just appear to do so from our fixed perspective here on earth. Explanations of the mechanics of a thing are interesting but insights on the net effect are generally more useful.

I see the energy of a planet’s retrograde motion echoing that of one of those pull-back cars I had when I was a kid. You set it on the table, pull it back and let it go… wheeeee, right up the placemat ramp into your sister’s Wheaties, Evil Knievel style. The retrograde motion is the pull back. When you’ve gone as far back as you can go and it stops, that’s the station. You let it go and it moves slowly, picking up speed; when it hits its top speed that’s the planet moving out of its retrograde shadow.

In a perfect world we’d all take the time to completely devote ourselves to reviewing the planetary matters of that retrograde. But when is that ever entirely possible? It’s not. Life gets in the way. Those planetary affairs take up our concentration and that’s rarely the best time to act. I hate being interrupted when writing but if the house is burning down, please do let me know in a timely fashion.

Here’s my plan for relevant retrograde action: if it can wait, I let it wait. However, if it’s a timely opportunity I’m not going to miss out just because it’s not the best time possible. Most of all, I’m not going to worry about it. To paraphrase Yoda, do or do not, but don’t sweat it.

What is your attitude toward retrograde periods?