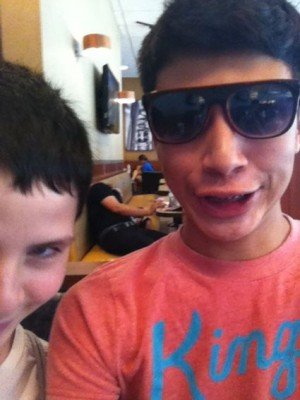 This is for parents and also for old timers around here.

My son is visiting right now. Vid. He’s seventeen now. He’s in college, studying engineering. He’s getting straight A’s. If you’ve been reading me for awhile, you know it wasn’t always like this.

My son has his Sun conjunct Saturn. He’s mature for his age. He’s already able to look back on his “childhood” and see some of things I did and how he benefitted from them.

He specifically mentioned how I set him and his friends up so they could ride the light rail from the suburbs into the city (20 miles away), so they could go to Six Flags, independently. It was a risk. A helicopter parent would have never done something like this. But I was working with the charts of the boys…

My son has Mercury and Jupiter conjunct in Aries. That’s a daring, independent, adventurous, combination. It’s in contrast to Sun Saturn which can be fearful but also shine (Sun) as a responsible (Saturn) person.  His best friend was an Aquarian with Moon Saturn in Aries.  You can see how facing fear and living independently would benefit these two.  So I sent them into the city, to lead a group of their friends to the amusement park.

They were thoroughly prepared. The light rail system was pretty limited in Denver at the time. I printed the schedules and the entire map so they could imagine the visual; see where he was going, while in motion on the train. I had them text me from each stop, for both our benefits.  I knew they’d be scared. I wanted them to mark their progress. I wanted their faith to pay off…which it did.

The arrived at the park, safely, and spent the summer going back and forth to the park with their season passes. They learned to leave the park and eat from the dollar menu at Mcdonald’s since they had little cash.  They took pictures of their adventures which are already precious to them.  Hey! No guts, no glory! This is life for Aries!

Two years later, my son’s friend went to work at the part, riding the rail to get there.  My son gets around the town where he goes to school, confidently, though car-less.

I’m writing this today because I had a client yesterday whose son has a really hard chart.  He’s got a difficult Saturn transit at seven years old. I was telling her, she’s got to let her kid take some knocks. And I remembered how hard this was, back when my son had his first Saturn square. It was agony watching him go through it. But it sure has paid off!

Astrology can really help you parent. There is no question about it.

Yes, that is a pic of the boys…with a passed out drunk, behind them.  They were out, having a life and I’m glad they did this!