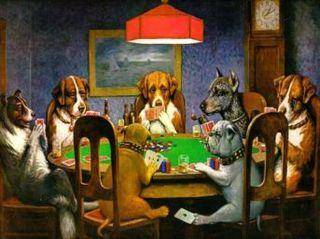 On the drive to New Mexico, I was thinking about Kate (Kate Mulvey Can’t Get A Date And It’s Because Of You!) and trying to fathom her and people like her. People who project their shadow onto others, that is. How do they get that way? Better yet, how do they stay that way?

How can a person be faced with overwhelming evidence there is some problem (such as every man they meet runs for the hills) yet continue to deny any culpability or wrongdoing? This is baffling to me and it made me think of when I was a kid, playing cards.

I used to play cards like crazy when I was a kid. I played with adult men and I was fiercely competitive and ambitious. I wanted to win everything, every time and played those cards with every cell in my body. And here’s the thing about projection:

When I lost a hand, I did not imagine it was because the person across from me was inept in some way. Or better yet, that everyone at the table was flawed!

But this is what Kate and people like her do. And maybe via this analogy you can see if you do this, it is going to be absolutely impossible to progress. You simply have to deal with yourself.

We all project to some extent all the time. If you have oppositions in your chart (especially to personal planets) you are going to be far more prone but no one is immune. We all have a 7th house which is routinely projected. And if we’re talking about the shadow… well that’s Pluto, but any energy can be projected. Your anger for example and even your desirability!

What do you project? What’s in your 7th house?