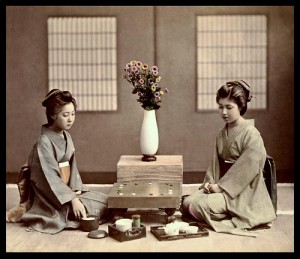 I was 25. My progressed moon was in Libra. I planned the biggest blowout party of my whole party planning life. Chinese New Year at the infamous House on Fry Street. I also fell in love.

About 6 months earlier, TK and I parted ways. He stayed in the apartment and I moved out to go back to school. I answered an ad on Craigslist. “Big house looking for a roommate who doesn’t suck.” Everyone there was younger than me, but they only wanted $200 for a huge upstairs room. I took it.

I threw myself back into university living. Hours and hours of sitting at the coffee shop, reading and smoking. Late nights drinking jug wine on the porch having conversations with anyone passing by on the way home from the bars. I worked on my go game. I raised my rank from a novice 20 kyu to a relatively respectable 10 kyu. For those of you unfamiliar with the game of go, it is a strategy game of balance and boundaries. My progressed moon was conjunct my Sun/Saturn at the time, so there you go.

Being a Libra, with a Libra stellium, plus the progressed moon I’m surprised I managed to fend of potential suitors as long as I did. I wanted it to be my time. I hadn’t been properly single in 3 years. I was going to live it up, not fall into any commitments, and revel in my freedom.

Then I met Albert.

I was sitting at the Kharma Cafe, working diligently practicing Chinese characters. The semester had not yet begun. It was a week away but I had already purchased my text books and I wanted to get a a head start. Remember, my Sun/Saturn was activated.

Ryan, an old friend of mine came in laughing it up with a guy I had noticed in there two days before. Who was that guy? I thought I knew everyone in here.

They asked me if I would watch their stuff while they went outside to play Hacky Sack on the lawn across the street. No, I was not willing to be responsible for their shit. I was too engrossed in my studies, could they not see that?!

Then Albert said “Come play with us.”

Later that day he asked me out on a “Date.” As in a literal date. I thought that was a real stand up thing to do, to actually use the word date. “Would you like to go on a date with me?” His intentions were on the table. I tried not to shriek, but I did anyway. “YES! I WOULD LOVE TO GO ON A DATE WITH YOU!”

Where were you when your progressed moon went into Libra? Did you partner with anyone?

If you would like to talk to Nota about your Progressed Moon, or anything really, click here.