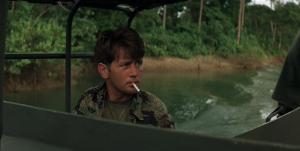 I’ve become withdrawn during Pluto’s transit through my 12th house. I expected it but it’s still amazing to actually live it.

Pluto crosses my ascendant in 2020. I wondered if I might be seeing the light at the end of the tunnel by this time. I do not. To my surprise, I see I can’t even coast along to the end, knowing it’s coming, Instead, I feel it’s necessary to become even more obscure.

I’ve been using graphics from, “Apocalypse Now”, throughout this transit. It is my favorite money of all time.

The main character is out there alone, authentically. He’s coming back. But he’s gone out so far, he’ll never be able to ever interact in a way he might have before his experience.

I think it’s because this transit strips a person so thoroughly. I’m not sure it’s in anyone’s interest I show up naked. Holding up a facade creates a bevy of other problems (for myself and others).

When I consider these two things, four or five more years in the swamp doesn’t seem so bad. I’m acclimated and non-threatening to others…at least until they decide to threaten me.

Tell us what happened when Pluto transited your 12th house?