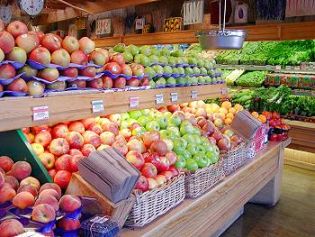 The Moon rules home and family and more succinctly, your roots. If you’re paying attention then you see in my case all this Catholic stuff is part of my Pluto Moon transit. Besides the fact my mother spent 10 hour days in the local Cathedral, one a deeper level, it is hard to separate Italian from Catholic – Period. But anyway, today I stopped in the grocery store on the way home from the gym.

For example, I worked for Frito Lay for 10 years which had me in the grocery store 6 days a week and on the 7th day… well I went to the store then too of course.

If that’s not enough for you, when I was 10 years old and living in the desert, I stole a truck and why was that? It was so I could go to the store of course! So that’s how bad I want to go the market, in particular the produce section and since I go there so frequently I almost never need a grocery cart. While I know these are necessary, I still consider them a blight on the landscape and use a hand basket myself as I go swooshing into the store like an actress who has found the right stage.

Now today, I did exactly this but as I rounded the corner towards the produce section I ran smack into a man. I did not physically collide with him, we both just saw each other and stopped dead in our tracks. 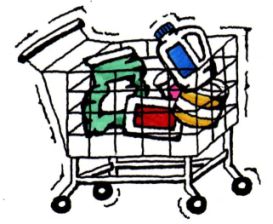 Oh God, it’s the thunderbolt, I thought as we both did a double take.

“You look familiar to me,” I stammered.

“You look familiar to me too,” he said in his pinkish shirt and his stylish mafia shoes. His hair was fixed,

“I think it’s because we’re Italian,” I said with my eyes wide because I knew the soldier would be out of his skin at this point. He’d have punched this guy by now.

“Yes,” the man said as I took a sharp turn into the produce section as if my “ass was on fire”. Oh no, my ass!

That was my thought because I knew he’d be looking at it but what I could I do. I ran like a rabbit… dodged him one more time in another part of the store – went home and told the soldier.

“No, I’d not have kicked his ass. You can’t kick a man’s ass for looking at a woman, even if it’s my woman. I’s have just grabbed you,” he said putting his arm around my neck. “I’d have grabbed you like this and said, come on, P. Quit turning on men in the grocery store…” And here is the point:

This stuff… this Italian stuff in my case – It is in the blood. That man was struck by me and me by him because we recognize and trigger each other on a soul level. Words fail because words fail.

Do you resonate with your tribe, or not so much? What does your 8th house look like? How about Pluto?