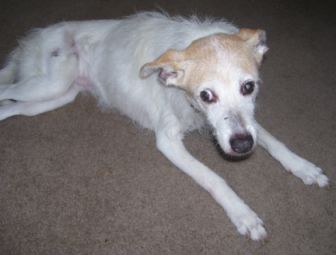 “Yeah, you’re in the right family now,” he said, addressing Dora directly. “These people are going to be on to you.”

“Yeah, she’ll be teaching Clucky the tricks of the trade. Everyone who sees that dog thinks they’re going to feed her. Why you starvin’ her you mean old bastard. You’re starving that dog, you better give her to me! What, I say. That dog is eating steak. Steak right off the grill. Tender! Hot from the grill and she turns her nose up. Hell no, she’s not going to eat. She’s got the starving dog thing down pat, she’s not changin’ a thing. She’s not gaining one ounce. She’s not gained an ounce in 15 years and she’s been fed like a Queen the whole time.” 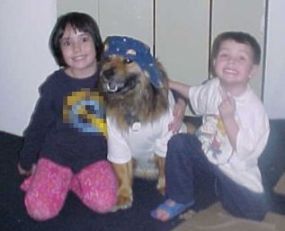 “Yeah ai know and she’s messin’ with Cluck (Lucky). Just like you said, she bites him. She snips at him when she thinks no one is looking.”

“Hell yes she’s messin’ with Cluck. Dora messes with everyone, she’d just that kind of girl. Eventually Cluck is going to get pissed off and snap at her and when he does she’s going to roll up in a ball and act like he’s killed her or something.”

“It’s already happened. Lucky attacked her,” I said barking ferociously. “Vid and I ignored it completely.”

“Good! Because she pulls that shit with everyone and look,” he said nodding to Dora sitting next to us at the table looking starved. “You can see how much it’s damaged her psyche. Yeah, the poor dog is broke in two.”

Know anyone who acts like this? Needles a person when they think no one is looking and then howls when they attack? Hmm.