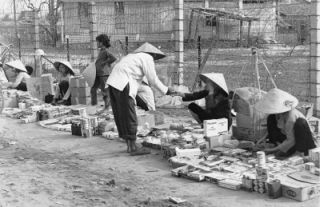 I seem to be the only one around here interested in this (yet) but hey. I used sell on ebay long before Meg Whitman came on board, long before there were fees to sellers. Matter of fact I was also a very early user of paypal who (get this) launched with this promise – “No fees forever!  Send money on the internet for free!”

If you wonder how they planned to do that – they said they were going to make money on the float. Whether that was a real intention or a ruse, I doubt we’ll ever know.  It’s all history now and I think we’re all poised to be living some serious history over these next years so don’t mind me while I mind it.

18 months ago, the soldier was driving a truck. We had some months of bliss before he had to go back out and he reports how things have changed. I reported on the cargo theft which is nothing more than modern day train robbing.  I reported that the Dell Laptops can be purchased new in the box at various truck stops if your timing is right (the soldier will not buy / participate).

Today I told you about the expansion of the whore business which has always thrived in trucking but is beginning to see some innovation. (Whore Report)

He told me that now people are selling everything you can think of on the cb. DVDs…

“Hell no. Never heard anything like this before in my life. Commerce is going underground, P.”