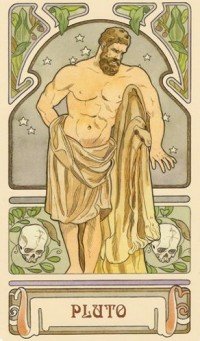 I was reading a local story, about a two year old child who was killed by his mother’s boyfriend, apparently with her cooperation. The article included pictures of the man and the woman being escorted for their (separate) court appearances. The pictures struck me.

The woman is holding her head up in her picture. She looked almost, “defiant”. In contrast, the man’s body language is complete opposite hers. His head is down, trying to conceal his appearance. He looked completely and utterly ashamed.

Looking at him, I wondered how his mother might feel, seeing her son in the paper for killing an innocent child. It’s got to be ghastly.

With Pluto in Capricorn opposing Venus in Cancer, the dark, hidden side of parenting/mothering is in focus at this time. It’s just grotesque. I feel grotesque.

When that man killed that baby, I doubt he realized his life would end at that very moment. But I think this is what has happened.

People hate consequences, don’t they? (See Free Will & Consequences)  But I don’t think this man is ever going to recover from having killed that baby. He’ll kill himself or be killed in prison…probably very quickly.

And the mother of the killer? I guess she’ll have to endure.  She had a baby. Twenty-some years later, she sees him doing the perp-walk.

How do you see this aspect playing in your life?