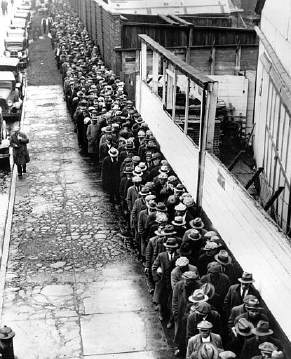 Remember, “Vivian”? I wrote her story (intertwined with my own) last January in a series of post, you can read them here – Tale Of Two Husbands, just click the links at the bottom of each piece to advance.

It’s a year later now and I saw, Vivian today. I still like her tremendously and her her husband still does not have a job. It’s not surprising because he quit looking a few weeks after he was laid off. Turns out after 20 years on the same job, working without fail, the family was better off with his collecting unemployment, food stamps, medicaid, etc. Plus he could work on the side so…

“Your husband found any work?” I asked.

“No, we’re going to get him on disability,” she explained.

“He’s not going crazy not working?”

We went on to tell me that he just found out he can collect unemployment until October next year. “It was going to run out in May but he called them and now it is October,” she said. “I don’t know why they keep giving it to him but they do. That’s almost 2 years of unemployment.”

“Yeah, well he’s driving me crazy but he likes it. So it will run out in October unless they extend it but we should have him on disability by then.”

“What’s wrong with him?”

She listed a combination of things, high blood pressure, diabetes and complications of diabetes like his eyes are bad. I have no idea if it all added up to “disabled” or not so I didn’t say anything. But boy you have to admit the change here is stunning and if this is going on across the country – look out because we can only be headed to total collapse.