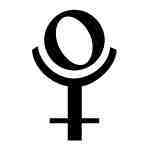 “And if you EVER try something like that again. I will KILL YOU!”
–Patsy Stone, Absolutely Fabulous

This weekend was interesting. Pluto trined Mars, Mercury and Venus and squared Black Moon Lilith. Interestingly, Lilith was also on my 8th house natal Lilith to the degree. It’s been quite the time, let me tell you. I lie in bed at night and try to think of something besides slapping people. I think of the self defense video guy, “elbow to the head, elbow to the head, knee to the groin, knee to the groin.”

I know how to hold it together though. I made it though most of the week while this was constellating without anyone being the wiser. I knew I had a funeral coming up Saturday so I had other 8th house fish to fry. In addition, I’ve always had the feeling that if I ever let loose with the slapping I’ll wind up in jail. I’m pretty sure that’s true.

Pluto square my 8th house Lilith has been onerous. I keep waiting for “the dirty bitch” to show up. I keep expecting to run afoul of a dark-sided woman. I keep waiting for my mother to lose her shit on me. It didn’t happen. What did happen is that my man decided it was more important to see Smokey Robinson in concert than to attend my family funeral. Oh yeah, the nasty-ass bitch showed up; she was ME.

I’m not in jail, there was no slappage, but that’s only because he had the sense to stay away. A local friend of mine’s significant other was not so smart. Lilith is conjuncting her Chiron currently. They were out on the town and got into a fight. He called her a fat c*** and she dropped him with a kick to the balls.

My significant other is walking just fine today but he’s out in my yard doing hard time. Penance. This isn’t something I’ve tried before but it’s probably better than than violence. More work done, less jail time, a new way to be a bitch, I guess, for my Lilith return. I think Lilith in the chart, well-handled, is the best of our inner bitch. She’s the energy we can go to when all else fails and we have to get primal.

I told the man about what the other guy said. He said, “wow, I would never call a woman that.” I said, “what, the C word?” only I said it, and he nodded. “You can call me that all you want, just don’t call me fat. That’ll get you killed.”

Lilith is at 7 degrees Aries. Where is it transiting your chart?