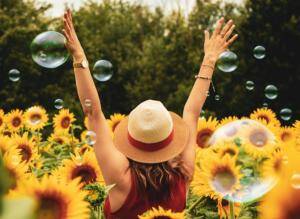 You know how the Sun is at its highest around noon, but that the real heat of the day doesn’t start until mid-afternoon? Well, that 3pm heat is when the Sun is in the ninth house. It is literally when the Sun is strongest in the sky. And since traditional astrology is thoroughly based in visible celestial phenomena, it makes perfect sense that the ninth house would be where the Sun rejoices.

Of course, it goes much deeper than that. In traditional astrology, the ninth house is known as the House of the God. If you recall the post of the third house, you’ll remember that the third house deals with religion and spirituality, but in a communal, ritual sense. The ninth house, standing in opposition, is where individuals ask the big questions. It’s where we confront the kinds of questions that one can only answer for one’s own self. “Why am I here? What is my purpose? What do I believe?” So just as the Sun provides the underpinnings of our individual identities, the ninth house represents the underpinnings of our belief systems and the way we approach the world.

The Sun is also seen as a neutral figure, neither benefic or malefic. In Greek mythology, Helios, the sun god, was described as all-seeing, his watching eye always upon the world. From this, we get the ninth house’s connection with law. The Sun is both neutral arbiter and omnipotent judge. Because of this, the ninth house represents justice. And when the Sun is involved, justice is often done.

Finally, the ninth house is associated with travel. And one thing I love is that, when talking about travel, most people immediately think of going somewhere sunny and bright! But outside of this, the connection to the Sun may seem tenuous until we think about the daily life of most peasants, particularly in Europe. Travel was very uncommon EXCEPT in the case of pilgrimage. And it’s here that we tie in the ninth house’s representation of what shapes us and the Sun’s role as life-giver. It’s not a huge logical leap to see how religious travel would fit in here.

The Sun is who we are. It’s how we shine and how we construct our identities. The ninth house is where we confront our desire for meaning. It’s how we decide what really matters to us in life. And when we combine them we see so clearly the interplay between our individual selves and the cosmos. The question, “Why am I here?” is an intensely personal one, but it is also universal. And with the Sun and the ninth together, we see that the personal and the universal are one and the same.

Do you have the Sun in the ninth house, or do you know someone who does? What is it like?