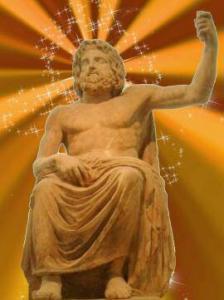 Good old Jupiter – the Greater Benefic, benevolent sky daddy, and giver of all good things. He is the generous, expansive teacher. In modern astrology, we often think of him living in the ninth house, sharing his perspective and igniting out wanderlust. But in traditional astrology, Jupiter rejoices in the eleventh house, and for good reason.

The eleventh house is one of freedom and sweet release. As planets rise above the horizon, they are initially hidden, obscured by the atmosphere. That is when planets are entrapped in the 12th house. But when they escape that 12th house invisibility, they burst forth into the shining glory of a new day. For this reason, the eleventh house is one of freedom and release, as well as dreams, hopes, and allies. The dog days are over, your luck is turning around, and it’s time to enjoy the good life.

Jupiter, the OG king of doing it up, finds a perfect home in the eleventh house. The good life is his middle name. He brings fertility, abundance, and even excess. Here he distributes his gifts like candy. No wonder the eleventh house is the house of hopes and dreams, and easy luck. When Jupiter joins the party, he makes it RAIN.

But there’s a deeper meaning here. The eleventh house is also the house of friendship. Now, in the ancient world, when these associations were being made, friendship wasn’t quite what it was today. A friend wasn’t just a person to have coffee with or to talk to online. They certainly weren’t just a number on a Facebook page. Friends were allies.

Friendship meant that you had someone in your corner no matter what. Friendship was like family. If your house burned down, your friends helped you rebuild. If you wanted to start a business, friends financed your endeavor. A silly, extravagant song from Bob’s Burgers really says it best:

He crashes on your couch when he loses his job
You feed him soup when he breaks his jaw
You help him pee when he has that thing
He’s your best friend!!!

And that is why the eleventh house is the house of friendship and luck, hopes and dreams.  In the ancient world, the more friends you had, the luckier and more successful you were deemed to be. And with friends like that, it’s easy to see why! They are your safety net, your ticket to greatness, and benefactors. And in this sense, Jupiter, the ultimate benefactor, fits right in.

Do you or someone you know have Jupiter in the eleventh house? What is it like?