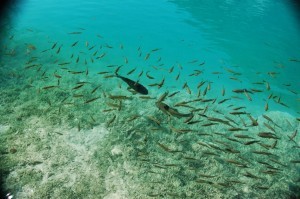 The Moon is the emotional body. The Moon “needs”, the Moon desires. The Moon feels. This is different from Venus. Venus wants and craves in an soulless sort of way. Venus does not feel. The Moon is love while Venus is a more intellectual or aesthetic attraction. The Moon needs must be met in order to find satisfaction in life. Satisfying the Venus needs is not core to emotional satisfaction. In a best case scenario, you satisfy both, but without Moon satisfaction there is no true happiness.

Pisces Moon is Neptune ruled, yin, in water. It is mutable, able to change and morph at will. Neptune is the magician of the zodiac, the deeply spiritual. It’s powerful in its vast ability to change and morph, to encompass and erode. Water always wins. It can erode, move or surround anything in its path. It is also the most painful and the most gentle of signs… because it is highly sensitive, the MOST sensitive. And it can’t turn it off easily. And it shouldn’t. If you turn off your emotions, they are not really off. What happens is that you allow some other function of your energy to take over and it’s not suited to this (so the emotions will not be operating in a healthy manner which gums up the works).

Pisces Moon feels deeply, their own feelings, the feelings of others… and just everything. This can be extremely overwhelming and they can find a way to distance themselves or tune out (also a Pisces/Neptune thing). Neptune can be higher love, but it can also be confusion. The usual Neptune/Pisces emotional reaction is to blur out problems, feel sorry for oneself, or denial.

But Pisces Moon is also the need to merge, become one. Pisces Moon can be the sweetest, most soul satisfying love anywhere. But like magic, they can also disappear (particularly when overwhelmed).

Neptune in aspect to the Moon or the Moon in Neptune’s house (the 12th) can have a similar effect. It doesn’t negate the actual Moon sign, but modifies it.