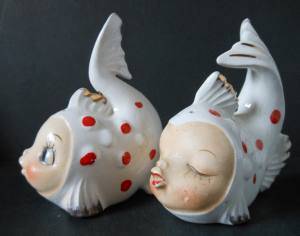 My Fiance and I both have Pisces moons, and I find that our moods are highly contagious. This is wonderful when feelings are good, but if one of us is feeling particularly bleak (recently that’s been me, due to frustrations around my career) we can bring each other down. This doesn’t happen too often, but when it does, it’s a doozy!

Any advice on how to communicate without totally contaminating each other?
Thanks, O

Dear O:
I am always fascinated when I see “complicated” synastry charts, and you and your fiance do indeed have it. You are super Aries, with your tight Sun/Jupiter conjunction while he is super Scorpio with his Sun/Jupiter/Venus!

You have a Uranus/Moon square and your boyfriend has a Neptune-Mars/Moon square. While they may both be Pisces Moons, the aspects make them ” emotionally react” very differently.

What you described as being contagious, I call “mood stealing”. It’s a common phenomena among people who have similar, yet different Moon signs, like yours and his. It’s also really unfair! The good news is, you are aware of it, you wrote me about it. Lots of people aren’t even aware, and have ever-escalating fights about things that don’t make sense!

So let’s break this down. You’re Cancer rising, with the ruler being that Pisces Moon at a critical degree, sitting smack on your midheaven! And coming right after it, in Aries, is the Jupiter/Sun conjunction. So this already is a set-up at work. It speaks to me as someone who knows how to take the lead, but can’t be seen or heard in some way. Because your Moon is squared by a Uranus/Saturn conjunction, there is great frustration on your part because you hesitate to express yourself in the way you’d like. There can be a lot of reasons for this, but the bottom line is that you have breaks on your full expression. This causes a huge buildup of emotion. When you get home (Moon), you want to be able to let it OUT!

But… your fiance has that Pisces Moon at an even-more critical degree, and his is square Neptune/Mars. His frustration builds up very, very differently. Very internally, and he may much more confused by his emotions than you are about yours. Plus, he’s not a lover of arguments. Not with all that Mercury/Saturn/Pluto in Libra. He needs to carefully consider all sides before letting his emotions out. He may process his emotions through his brain, logically. He is Sadge rising, with the ruler in his 12th. , and his Moon is in his 4th house — both of these deeply emphasize the need to retreat to process.

Synastry wise, your Pluto sits on his Sun. When you try to MAKE him express himself, he goes deeper in, like a turtle pulling his head into his shell.

Adding to the “hurt” factor is the fact that his Chiron sits at 26 Taurus, I have written in other Dear Dianes about the 24-29 degrees of Taurus, it’s a very, very sensitive area… and your Mars is at 24 Taurus. That synastry, in itself, speaks volumes about the ability you two potentially have to wound each other, if you don’t own your own feelings and act effectively, on your own, to deal with them. It’s HUGE. I could write for an hour alone on just this kind of synastry and the ramifications… and the possibilities of deep healing.

The short answer to your question is you have to learn how to identify to him immediately that you are in a bad mood about work, and then take yourself somewhere for a time out to get over it. If you are coming home and looking for a place to displace the energy of your frustration at work, you are barking up the wrong tree by picking on him in any way, even if seems justified at the time. It can be as simple as you come home and want to process what happened, you tell him about it and he doesn’t react the way you want, you are now even more frustrated and he sees it and he knows he can’t fix it and… he disappears right in front of you.

This can frustrate you even more, especially if you don’t feel like you’re being seen or heard at work. Now you’ll feel like he’s not seeing you either, and will lash out (Moon square Uranus), which will cause him to feel depressed and angry (Moon square Neptune/Mars) and BAM, your mood is stolen. He now is madder and sadder than you were when you walked in the door. So now you have to put YOUR mood aside to deal with his mood.

This is a very effective (not really) way of getting someone to stop having a “bad mood” — you become madder or sadder than they are, even if it means you have to become the target of the energy that caused it in the first place. Does this make sense? He is essentially sacrificing himself in an unhealthy way (Moon square Neptune) in order to distract you from what it is you are originally upset about. But in the end, nobody’s happy!! You still have the original frustration, he now feels angry and victimized, and nothing was solved, despite all the machinations.

Success comes when partners make an agreement to be upfront about what they’re upset about ORIGINALLY, and stick to it. Be willing to allow your partner to process the way they need to (as long as they keep owning their feelings and are not redirecting them onto something “new”).

Thank you for giving me an opportunity to look at these very interesting charts and the synastry between them. I hope I have helped clarify the issue you wrote about!