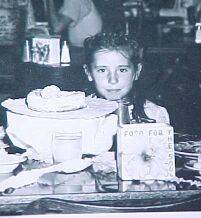 I am not an Aquarian, but both my parents are UBER-Aquarian so I know quite a bit about the sign. And my editor, HQ who keeps a blog was jerking my chain today. He accomplished this by posting a blog using my language. Yeah. Slick.

So I saw this, ignored it and left a comment. Because I don’t own the English language, right? People can use whatever words they want, whenever they want, however, etc. And I know that. But after I commented, he emailed to bring my attention to his craft.

“Did you notice?” he asked? “Ha ha that was my little joke to you…”

Because he knows me well enough to know this would piss me off. And I know I got this from my mother. And with Pluto transiting my Moon… my mother would be on my mind of course.

But anyway, my mother (a double Aquarius) was an innovator. She was a freak, Henry’s daughter, she was a very unusual woman. That’s her in the picture on her birthday. And if you look closely you can see the wrapping on her present says “Food For The Soul” which is of course wildly ahead of it’s time considering it was the 1940’s.

So my mother always distinguished herself and she did it in all ways. By her dress, her mode of transportation, her speech, her philosophy, you name it. And she was generally 7 years ahead of the pack (Uranus) but eventually whatever she was doing would catch on with the masses and boy would she be pissed!

Because she was not going to be caught dead doing what everyone else was doing, right? So when the trends caught up she was back to the drawing board having to innovate again and I think I inherited this from her to a degree.

How come everyone on the block has to paint their house the same color I painted mine? How come people name their dog (and one person, their child) what I named my dog? Don’t you think when you name your dog what I named my dog, I’m going to notice that? Egads.

Someone on this blog quoted my mother from 40 years ago, “It is a sin to bore people”, in a comment, as if this were their personal philosophy they came up with a week ago. Er… ‘scuse me but you read that here.

And this is exactly the kind of thing that would drive my mother insane.

Ben too. (Aquarius rising). He pulls his hair out over this as well.

“I don’t see why people can’t have their own ideas. Why is that? Can’t these people think? Is it that hard to come up with something original? I get so tired of being copied. I know it’s supposed to be flattering but I am not one bit flattered by it. I am sickened by it! What’s so wrong with the person you are, you have to try to be the person I am? I swear Elsa. So many people do this. Have they no identity of their own? Does nothing originate inside of them? Never mind! Let’s not talk about this anymore. It gets me too upset. So how are you anyway? Have you done something original lately? Do you have a thought of your own to share?”

Can you relate to this? Are you Aquarius?