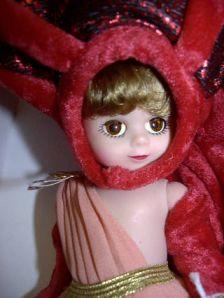 I am a 26-year-old woman and still searching for that all-elusive passionate lover to ravish in my flames. I have always been very idealistic about love, romance and consider sex to be a sacred thing. Finding a man to connect with on various levels has not been easy.

A few months ago, I met a young Gemini man who is setting up a social enterprise community to serve charities with a pool of creative altruistic people. I joined his group and began to see him there every fortnight. We also went out to dinner several times, and shared some of the deepest, fabulous conversations I have ever had. I was impressed by this man’s fire and altruistic vision, and intrigued that he made no passes at me at the end of any date, walking me home to the door, then leaving with a small backward glance. In short: the perfect gentleman…

After a few months, at the end of one dinner, he told me he had feelings for me, and did I … Well, I kissed him then, and then we fell into one another’s arms with such a passion! A few weeks later, he invited me to his house for the first time. We ended up making love, the condom broke, and I handled it very badly, freaking out in the middle of the night etc..

The next morning he said he did not think a relationship would be possible in the light of my freak-out; that I was too volatile etc. But he said he would like to keep me as a friend, and we should keep it at that and see what developed. He also told me he had suffered manic depression in the past and having built himself up to a stronger position over several years, he did not want me to be in a position to hurt him again. He also said he had not been with a woman for several years.

Over the next fortnight, I bitterly regretted having freaked out and scared him away. I resolved to overcome this sinister tendency and did everything in my power to change my attitude to one of gentleness to make amends when we next met. But in truth, this man was so potent, he had really set me aflame inside my heart and body!

When next he agreed to see me a few weeks later, as friends, we had dinner as usual, and then it seemed he was happy for us to go our separate ways again. At which point I seduced him with my words, telling him that I had real feelings for him. We started to kiss again, and then he asked me to take him home. Which I did, and showed him all the tenderness I had in my heart with many kisses etc. There were no freak outs this time, and he ravished me to the stars and back. But in the morning, he repeated what he and said, that he did not think a relationship was possible, we were both too volatile.. His offer of friendship had been real, but we had not stuck to it. Confusion descended again, and off he went, wishing me ‘A Happy New Year’ if he did not see me before then…

I cannot get this man off my mind! He represents so many things I have searched for, and I would like to help contribute to his social enterprise project. But I feel as though he has set his mind against loving me. Is it hopeless to try and change it? I feel that maybe if I rejoin the social enterprise group and do good works therein, playing it cool, and forgetting the way we were both deeply stirred, then maybe he would open up again? What would you suggest?

I do think it’s hopeless because he simply has no interest in being what you want and he has consistently said so. But you asked what I would suggest and this is it:

I suggest you ask yourself why in the world you would see another human being walking around, and think it right or normal or acceptable to try to move and maneuver them to where you want them to go? Because I think this is insane. And it’s certainly not love.

It’s 100% about your desire to take possession and control over another person’s life, which is never, ever, ever, ever, ever going to work. Because people don’t like it! People don’t let you run their life, even when they pretend to. So that’s what you can get out of this. The knowledge that as a double Cancer, you are looking for someone you can control. Which is why the freak out over the condom, see? Something happened outside your control! So this is your core problem and the guy?

It sounds like he knows what his problem is and has his hands full managing it. I am sorry, but you are not his priority and I can’t imagine this is ever going to change.