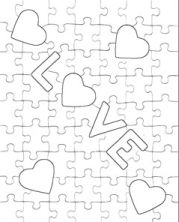 I was talking to pal about her difficulty finding a partner.

“You haven’t had the greatest role model as far as being in a happy relationship with a man goes,” I said. “Look at your mother. Her priority is to have, and preferably to have more than other people. A man is irrelevant to her for the most part.”

“I know. She doesn’t even care if she likes the guy. Her focus is on having more all the time. She wants as much as possible and being happy is not even in the equation.”

“That’s true. and she knows this about herself.”

“Yeah. She wants to be able to buy things, this is her deal and she’s not shy about it. But now you come along and you actually want to form a relationship with a man so where to start is like a a big mystery. They may as well be dropping you off  in a foreign land. All you know about men is that you should get one so the neighbors don’t talk. The man is like a lawn ornament, I guess. So now you actually want to relate to a man in an intimate way.  It’s a big puzzle, seeing as you’ve never seen it done.”

Growing up, what was modeled for you as far as male/female relationships go? Can you see this play in your life?