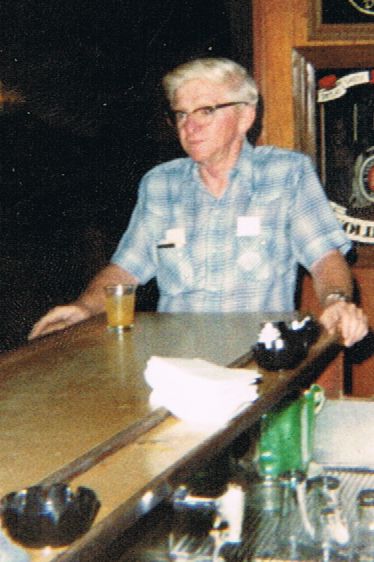 Continuing to honor the Saturn figures in my life, meet, John. John was Judy’s husband and they were in love.

The was a huge age difference between the two, 20 years or so. In fact, Judy met John in this very bar when she was a little girl. He was the bartender and she was there with her parents, Friday movie night.

John told Judy to eat her pretzels, drink her coke and be a good girl and when she grew up, he’d marry her. This is exactly what he did, buying the bar along the way.

John and Judy had been married a number of years when I came on the scene. The lived on a ranch outside of town and were very, very happy. Judy loved the hell out of John and he loved her as well. In fact they were married for 30 years before John died in 1999. Judy still owns the bar today.

Judy was one of the best bosses I ever had. She had good instincts and she was kind and shrewd which is something I appreciate. She was able to pick up on my quality very quickly and I’d only worked the bar for a month before she gave me the keys and the combination to the safe and made me responsible for making the deposits each night. I’d make them on that red motorcycle I got off the soldier.

She was ecstatic to have me to do this for her because it spared her having to drive into town twice a day (to unlock and then to deposit the money). She wanted to be home with John, see? She loved him to no end.

For his birthday one year, she got him an aerial photograph of their ranch which was cutting edge at the time. I remember her showing it to me, “Do you think he’ll like that?” She so wanted to please him and he was into aviation along with their ranch so she put the two together.

Inside was a very small box and inside that was 10 lottery tickets. The lottery was brand new back then and everyone thought it was cool.

In whatever case, Judy came in once a week to leave my check on the back bar. She would put it in a envelope with my name on it. “Thanks, Elsa!” the envelope always said and I swear it choked me up without fail. She made me feel appreciated is the thing and I sure wasn’t used to that. She inspired an incredible sense of loyalty with that small gesture – it just did something to my heart.

Back to, John, he very rarely made an appearance in the bar and when he did I was intimidated although he never gave me a reason to be. “Judy raves about you,” he said. “She’s not that hard to please so you must be doing a really good job. You’ve got my wife happy, that’s all I care about, not let me get back there and fix that sink.”

I jumped back to clear the way for him.

“No, I mean the smell. That smell is sour water. Ever heard of sour water, Elsa?”

“Well that’s what this is. It’s sour water, that’s what we used to call it in the old days and that’s what it is. Doesn’t it have a sour smell?”

“And that’s why it’s called, sour water. See there, you learned something new. Try not to forget it. Sour water, Elsa. Nothing in the world smells worse and I am sorry you’ve had to put up with this the last couple days. Won’t have to put up with it no more though because I’m here and I will have this fixed in no time.”

I have a number of clients who are in relationships with wide age differences. Because of Judy and John as  teenager, I know firsthand these things work extremely well when the love is there.

Oh, and the connection to our last suspect, Ted?  Well Ted had the first liquor license in the city and John had the second.  These men went way back and this is why, Judy told me to always treat. Ted well. He was her husband’s friend, see and she loved her husband and this is just my kind of people do.

ps – I would put Judy’s picture up here but I know she wouldn’t like it if I did so I won’t. Virgo, you know.