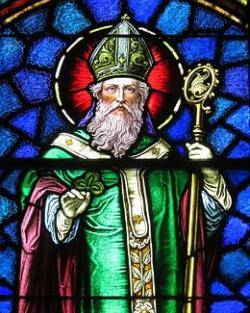 The new moon in Pisces takes place on March 17th which is also Saint Patrick’s day. The chart of the new moon is interesting and complex.

I usually feature a little cut out of the planets in the chart of the new moon. That won’t work this time. People who can read a chart to any degree will need a larger picture. Here it is: 2018 new moon in Pisces.

As you can see, the new moon takes place just shy of 27 degrees Pisces.  Chiron is at 28 degrees. People are bound to wig over this.

Further, Mars is at 29 degrees Sagittarius, squaring the stellium in Pisces. It looks like an arrow, aimed directly at your Achilles Heel!

I don’t deny a person might suffer under this sky.  But it’s just not that simple.  For one thing, Chiron rules Charisma. Yes!  Please see, You Can’t Buy Charisma and let other people know.  Is it a bad thing to have your charisma fired up? If you ask me, this can be quite entertaining.

Also note, the new moon is supported by Jupiter in Scorpio and Pluto in Capricorn. This is like having friends in high (and low) places.

If you ask me, we’re lookin’ pretty good. We’re vulnerable, yes. But we have backup!

With all this said, I do think some caution is warranted here.  Mars is at 29 Sagittarius 55 at the time of the new moon. It will enter Capricorn about four hours later.

If you get on some high horse and start a war, it’s going to be protracted.  Um…might want to avoid that.

We set intentions ahead of a new moon. Here are some ideas, based on the house in your chart where the new moon falls.

Where does the new moon fall in your chart? What’s your intention?