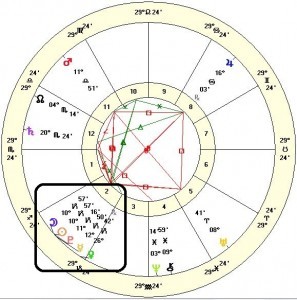 The New  Moon in Capricorn takes place in the early morning on New Year’s day, conjunct Mercury and Pluto, in hard aspect to Mars and Uranus. You don’t have to know a lot of astrology. You can look at that chart and see it’s remarkable.

People always want to know how these things are going to affect them.  First, read this: New Years Eve.  You definitely want to be careful.

As for understanding this on  a personal level, check the house(s) in your chart where the large stellium in Capricorn will fall.

If you need help with that, check this – Where does this transit fall in my chart?
If that fails, you can post your chart in the forum and someone will help.

The house where that stellium falls will be super-energized. With Mars and Uranus cocked and pointed at a stellium in Capricorn, things will be shook up and destabilized.

Now don’t automatically take that to be negative. For example, the stellium falls in my (spiritual) 12th house.  Yes, I could attack (Mars) someone, randomly (Uranus) and have the cops come down on me like a ton of bricks (Capricorn) and be jailed (12th). But what are the odds of that?  They’re low.

Most likely, I will continue to read (Mercury) and be nurtured (Moon) and inspired by the thoughts (Mercury) of men (Sun) / spiritual leaders (Mars) who have been dead (Pluto) for hundreds of years.  The boundary (Capricorn) between us will disappear (12th).

My intention (Mars) under this new moon will be to modernize (Uranus) my spiritual (12th) foundation (Capricorn).  See how a person has choices?

Here are some ideas for intentions, house by house:

Where does the new moon and stellium in Capricorn fall in your chart?