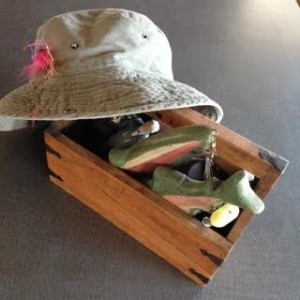 The Moon is still a few degrees short of conjunction with the Sun as I write this. It’s in my ninth house, so I’m philosophizing. Since my ninth house is Aries, my philosophizing tends to include lots of active metaphors, war and sports and swords and such. Aries is Mars! But sometimes action requires finesse.

Fishing is an action/sport that requires finesse, well at least fishing as I know it. There’s a lot of prep that goes into fishing, and if you fly fish, there’s a lot of skill too. But the act itself is necessarily gentle and relaxed. The fish are hot onto movement and I believe they can also smell stress. The best and most successful fishermen are prepared and relaxed.

Mars rules this new moon. It’s about how we get what we want. Mars is currently in Taurus. Fish slow and pretty. Dress up in your most excellent tan and khaki multipocketed gear. Wear a superbly floppy hat with colorful flies stuck through it. I can’t say for sure, but I think it works. It helps you really ground into that role. It helps you BE the fisherman/person, be the fixture that everything else flows around. I think it attracts fish… when you fish smart… and pretty.

You can’t fish hard. You CAN fish hard, but you’ll get your line caught and lose your lure/fly. OR you’ll bring up some old BOOT. Do you want an old boot? I think you’d better catch and release that sucker.

Mars conjuncts Mercury and trines Pluto under this new moon. Fish sultry, smart, and deep and you’re likely to bring up a powerful catch. And as the happiest fisherpeople know, fish or no fish, the real catch is a good day.