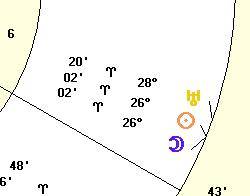 The new moon in Aries takes place around midnight on the 15th or in the very early morning of April 16th depending on your time zone. As you can see from the picture, the Sun and Moon are tightly conjunct Uranus.

Uranus will be moving into Taurus in May – Financial Instability.

Considering this, I view this new moon as the the last, best, loudest, most garish and energetic time to take advantage of Uranus in Aries.  “Burning Man” comes to mind. But really, you just want to reinvent yourself as a FREE INDIVIDUAL.

There has been so much pressure to conform or else!  We can blame Pluto in Capricorn and Uranus in Aries for all this control.  But this new moon is far enough beyond a hard aspect from Pluto, you’ve got a chance to really want to PUSH towards your liberated future.

There is bound to be some crap in your life, you’re just not going to deal with anymore.  You’ll not be responsible… or dependent for that matter. You are a free person in this world!

We set intentions under new moons. To maximize the potential here, consider the house in your chart where the new moon (and Uranus) will land. Here are some ideas:

Where will the new moon (and Uranus) fall in your chart? State your intention.