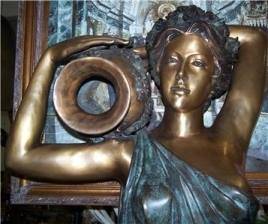 I’m a 45 year old single woman who started dating a Scorpio male about three months ago. We get along well, but I am wondering if ultimately he may be too serious and reserved for me – or if I am actually afraid of commitment. I can’t seem to enjoy the moment as I worry about how well we’ll get along in the future, etc.

I have many friends and acquaintances of both sexes. I just don’t seem to be like most women who want to be married and have children. Do you think this is just a fear of commitment or that I have not met the right one?

I’m glad you wrote because I don’t think either of those explanations is accurate in your case. There are some people out there who are just plain unconventional… period! And you are a stellar example.

You are an Aquarius rising. You have your Sun and Moon in the 11th house (Aquarius). You have Uranus (the planet that rules Aquarius) smack on your descendant and further, you have Jupiter and Saturn conjunct in you guessed it: Aquarius!

So does this make you afraid? No! It makes you an independent, nontraditional humanitarian with “friends”. And what’s wrong with that? Nothing!

My friend Ben is like you. He is also an Aquarius rising with Uranus opposing. The last “relationship” he was in was in the 80’s!! And this I not because people are not interested, because people have been literally lined up outside his door for each of the 25 years I’ve known him. But he has determined that pairing up is not for him. He wants no part of it! And he has stated this plainly for 20 years!

And you can imagine how many people have argued this with him, for what good that would do them. He’s not interested! And I have to say he is a gay man. So he is going to have an easier time pulling this off than you might as a heterosexual woman, however I just want you to know this is an option! Anything you want is an option.

So don’t go letting people tell you you’re afraid of commitment. You’re not scared! It’s just not your bag. And same with the “haven’t met the right guy yet”. Because that implies some kind of failure. You haven’t failed! You’re just living!

So might you meet a man you want to hook up with someday? Of course. But are you going to be and do like everyone else? There is no chance of that at all. I say, be happy just as you are. Because as my friend, Ben says, “This is a big world. I am sure there is enough room for someone like me…”