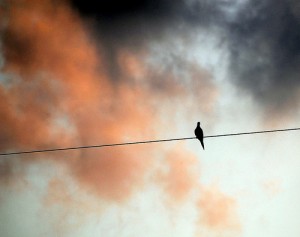 Moonpluto’s Bargaining with God piece sparked a memory. Actually a couple of memories but I’m gonna tell you about this one in particular…

This was at the house. Vinny came to live with us. Vinny was a friend of mine from way back. Our parents used to do the flea market and we, as adolescents would troll exposition park together looking to bum smokes and pass the time. We went to high school together until he just disappeared. Meth.

Everyone in our group of friends assumed Vinny was dead or close to it. Then one day I got a call from my mom. I picked up the phone and she said my name in that strange voice that lets me know the other twin is talking and said “you’ll never guess who’s here.”

Vinny had joined the army. He was standing at the threshold of the last place he had seen me, clean and healthy, wondering where his friend was. He was on leave and was stopping by to say hello.

Fast forward two years later. He had done his time. We had stayed in contact and when he called me up and said he was coming home I suggested he come stay at the house. The house was a dilapidated two story craftsman style heap of house situated two blocks from campus. At that time there were 5 of us and we needed another mate to make the rent.

I was excited to have my friend back. The thing I didn’t consider was that Vinny had just spent two years in Iraq and was in no mood to integrate back into society just yet. He holed up in his room, smoking high grade weed and playing nonstop rounds of Stepmania to escape from his thoughts. You could get high in the hallway just standing there trying to discern what the clacking sound was, asking yourself why was he listening to Dragonforce over and over and over?

I left him to his vices until one day he came into my room and left a parcel on my pillow. Attached was a note that read “Merry Pot-mas.” I was amused, but I also wasn’t amused. I was trying to get my life back together and had forsaken marijuana as part of that effort. I have Mars in the 12th house trine Neptune. I get into enough trouble letting the waves wash me whichever way they will without drugs involved. This was ridiculous. I opened the tiny baggie and took in a huge whiff. It smelled like Christmas. Dammit. I was past the point of reasoning anything out. I was in his doorway asking him if he had a pipe I could borrow. (I had thrown mine out.)

Cut to us, sitting in the dry bathtub, a towel rolled up under the crack of the door and the curtain drawn so as to keep the smoke billowing all around us as we partook of the herb. We started to talk about God.

I was going through my mystic Judaism phase and starting telling him about lightness and darkness and Angels and how there were levels of God we could never access or we would cease to be we… and he looked at me with one raised eyebrow. He was an Aquarius and had a habit of raising one eye brow, not in skepticism, but in condescension. His brow was saying “Just let me know when you’re done, so I can tell you how things really are.”

I wrapped up my grand thought parade and sat with the faucet poking me in my dorsal spine but still quite pleased with my abstractions. He shook his head half saying no, half enjoying the feeling of some smoke blowing from his lips in wild wisps. Something smokers do, they interact with the smoke inviting it into the conversation. He gestured with the apparatus in one hand, the lighter in the other. The lighter tucked under his thumb so his long musical fingers could fan out and wag at me to hold my attention. His eyes were closed.

His eyes still closed, his hands still encumbered with smoking materials but gesturing like a presidential candidate on the debate podium, making little forward rolling potatoes, he expanded. “God is just… this perfect…white dove.”

A long pause passed between us as I tried to process his metonymic God concept.

He continued “on a wire…outside my window.”

In a flash I understood the time he was talking about. His lowest moment, lost, looking for a sign of what to do next. He made a plea and saw the answer sitting on a wire.

I’m not sure where I’m going with this story. Thats the thing about these Neptune stories. They all just sort of fade in and out of one another. Maybe I’ll write some more later…

Has anyone ever shared their concept of God with you? Were you in a Neptunian place?

Consult with Nota about whatever.