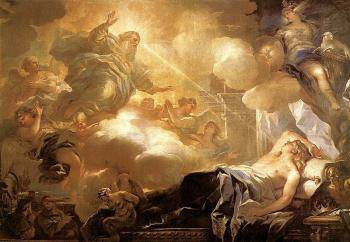 One aspect of Neptune that I often see mentioned in passing is the association with dreams. But there seems to be a lack of detailed information about what that means. Yes, Neptune rules dreams. But so what?

The so what is that Neptune is our source of connection to the ethereal, where inaccessible knowledge finds its way to us. When Neptune speaks, it’s often in a whisper. Still, we would be well advised to listen.

Neptune’s placement in your chart is no accident. Its location is usually a place in our lives where we don’t have a ton of clarity, and our choices and external conditions usually do little to help. But we’re not destined to confusion. This is an area in which we’re actually privy to special, ethereal, uncommon knowledge. And dreams are Neptune’s vehicle for providing it.

For instance, in my own chart, Neptune is in my jam-packed 8th house.  I have nightmares. In fact, I don’t ever NOT have nightmares. And they all have the same basic plotline. I’m being plagued by some kind of vaguely defined evil, and I have to fight for survival by uncovering the long-hidden knowledge to defeat it. Over time, I’ve discovered that the knowledge I uncover in the dream is always related to whatever psychological work I’m dealing with (or avoiding dealing with) at the time. I of course utilize the other 8th house planets to work with my own psyche as well. But those ethereal bits that come up from the deep are more valuable than anything else I’ve encountered. Neptune provides the key to transcendence.

House placements aren’t the only way to determine how Neptune distributes his gifts. Aspects come into play as well. In the above example, Neptune is trine Mars and Jupiter, hence the theme of heroic battles for knowledge. But it can be even more obvious than that. Take the mother of one of my clients. She has Neptune trine Venus/Chiron and sextile Uranus/Pluto. She once had a dream about one of her children (not my client) being stabbed. Lo and behold, a few months later, a person close to her child was arrested for threatening them with a knife! She had a dream (Neptune) about someone she loves dearly (Venus) being vulnerable (Chiron) to possible sudden (Uranus) death (Pluto). Isn’t astrology amazing?

Neptune by its very nature is subtle and blurry. It can be very easy to discount its effects or even ignore its impact in our charts. But to do that would be denying one of the most beautiful things about being human. Our connection to the divine, however we define it, is one of life’s greatest gifts. Make sure you accept.

How does Neptune speak to you? Can you connect the astrology?