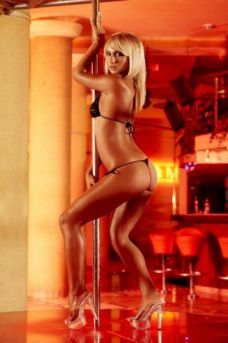 After writing (in the comments) about how at times people mistake me as something or the other and then become incensed when it’s revealed to them I am not who they think they are and reading the responses I got to thinking some more about this.

The one gal I was referencing who went absolutely insane over my lack of hatred for of strippers and whores and the men who frequent them, clearly thought based on reading my blog for a month or two (?) that I was akin to her. You know. She thought she could rely on me to be a kindred spirit and I think we were to a large extent. To a very large extent. But then we hit on this one issue and she just went ballistic.

She felt I was a poser of some kind… that I had a double standard. For example she thought (never happened) I was telling some gal to calm down about her boyfriend going to strip bars and insisted I would go crazy if it was the soldier going to a strip bar. This is just simply what she thought… or what she had arrived at via reading my blog.

However, she was wrong. I don’t feel those things. I would not react that way and there is no mystery about it as I used to go to strip bars with the solider when we were kids. I am telling you these girls do not bother me. So I told her this in the dialogue… I just stated it plainly but it was unacceptable. I had to be full of shit.

Well the soldier was sitting right here, so I asked him. “If you went to a strip bar do you think I’d be pissed?”

See what I mean? This is just what the situation is here in this house and I tried convey it – reality – but the woman could not bear it or stomach it or believe it or I don’t know what but I became a dirty lying bitch over all this. I am horrible due the feelings I just don’t happen to have.

Never said there was something wrong if someone else felt differently. Why would I? I only wanted to stand my ground… state who I am because it is who I am. You just can’t tell me I feel things I don’t feel as if you know better than I do and here is the point:

I write the soldier’s son quite a bit and he’s very smart. He’s smarter than I am and that’s not flattery but fact. However, I am old! So when I state something that he challenges because he does challenge things by his nature, it is pretty easy for me to produce evidence to support my claim. I mean, I have been me for a very long time.

I did not come up with “me” last week. I am not a recently invented person but have been doing what I do, acting how I act for decades. And particularly on this blog if you want to tell me how I suck… well by God with 5000 blogs on this site alone, you ought to be able to come up with some evidence to support your claim outside of your weird vibe impression triggered reality. Because in spite of all the claims and accusations of my craziness, I am inordinately consistent.

Er.. I have been a hot headed do-gooder for how long now? Well, my memories go back to about 4 years old and this is one of the advantages of age I guess. Or disadvantages if you don’t happen to like yourself. You are what you are and with 5000 blogs here, with my face and my name on them (twice), I feel pretty solid about who I say I am and the upshot is this:

If you define me in some way that I feel is wrong, I am going to be able to deluge you with evidence dating back to the 70’s. It’s like the soldier. He’s been fighting / defending for 40 years without fail. If you can’t figure out that if you cross or threaten him you are going to get punched then it is YOU who is the delusional one.

What have you been doing ALL YOUR LIFE? What is inarguable about you and can you see it in your chart?