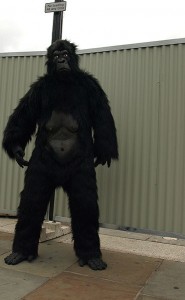 I took the kids to the movies Sunday. There weren’t a lot of other people in the theater, and most of them came in after the previews started. Before the lights came back up I decided to give myself an exercise in memory and perception. Without looking around I made mental notes of how many groups, how many in each and the genders and ages I suspected. I’ve been thinking a lot about Mercury placement and the senses lately. With Mercury in Pisces I figured I’d be pretty good at subconscious memory if I really let it flow.

I had just finished reading on the limits of perception and the importance of being “present.” One article cited a study where participants were asked to count passes between multiple basketball players in a video. Participants counted the passes but failed to note the person in a gorilla suit who ran through the frame. I also read excerpts from a book on concepts for training bodyguards, focusing heavily on state of mind and perception. I consider myself smarter than the average bear and grinned smugly when the lights came up and my intuitive perceptions were confirmed, to a tee.

Score one for Pisces Mercury! Then I turned to my Saturn-Neptune opposing Mercury son and asked him if he had noted the same. “Nah,” said, clearly impressed with my powers of discernment, “But I was really glad when that noisy group of kids behind us left,” a group of kids I had not seen AT ALL. Damn you, Invisible Gorilla!

What is the astrology of your perception? What aspects your Mercury and how does it manifest for you? Are you sure?