Back on the Church’s Fried Chicken situation and my bitchiness, I really didn’t mean to have that blog be about me.  This concept about giving people the benefit of the doubt or having their past conduct stand for something has been on my mind for a couple of months.

Awhile back I wrote a post about character assassination. I mentioned that two people in my inner circle had suffered this recently which led to conversations that went something like this:

“Okay, so they here this and that about you,” I said. “As highly as people think of you, do you not think they would question what they are hearing?  Does the whole town swallow the story, hook, line and sinker?”

The general conclusion was that they do but personally, I had a hard time getting this swallowed.  I wanted to think that someone would stand against the crowd and defend the person being burned at the stake but I guess this is not realistic. I mean there are exceptions but exceptions are rare by there nature so…

So a month beyond these conversations what I learned from them has been applied and I see now that in everyday relationships you are allowed choices of assuming the the worst, the best or at least something neutral when stimulated by someone.  I have seen this big time between the soldier and I as we are both people whose motives are constantly suspect to a wide range of people (even each other). But I have also seen it with (women) friends and/or clients who are trying to maintain relationships with men. 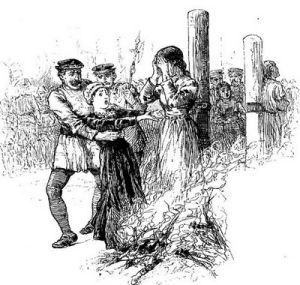 There is a tendency to assume the man has a nasty motive and the women winds up undoing herself. At least half the time, this is unbeknownst to the man who is not acting maliciously, has no idea that he is failing or even an inkling of the woman’s train of thought.

And what I am seeing is that if you train yourself to give people the benefit of the doubt, not only will you be much happier, your reduced caginess and anger can’t help but improve your relationships.

So anyway, this is what I meant to convey with that last blog and I have implemented this knowledge in my own life by giving the soldier some code words. I told him if I started going squirrely on him he should remind me, “P, I have money in bank. I have some credit with you, don’t I?”

I am pretty sure being reminded like that will snap me back and spare us both and with the climate the way it is out there I really think maintaining your alliances is a far better idea than otherwise.  The soldier feels one bad deed wipes away 100 atta-boys in his experience.  I wish he were wrong about that but for the majority he is not wrong so I will ask again:

Is it possible for someone to rack up credit with you… and have it be worth something?