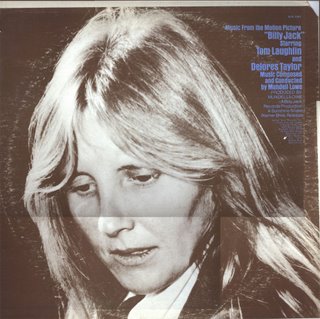 Billy Jack is an interesting movie. Here’s a little known bit about it: Quentin Tarantino was introducing the movie at a festival…

“Tarantino got on-stage and began to chuckle at the concept of pacifist hippie movies where everything is solved by violence. He really digs this movie, though, going as far as to call it one of the “best modern day westerns.” QT is quarter-Cherokee, and he says that the scene in this movie were Billy Jack describes the Indian religion was the first time he (QT) really got a sense of what their belief system was all about. He says its easy to dismiss their belief in the god of water, god of dirt, god of fire, etc, as being juvenile (as least how its portrayed in the media), but that when you hear Billy Jack talk about it, it sounds really profound.


The other really great thing that QT pointed out about this movie is that the female lead in this movie, Delores Taylor, is also Tom Laughlin’s wife in real life. Laughlin wrote and directed this film (and the other Billy Jack movies) and QT sees them as a really beautiful love letter between a man and his wife. Tarantino was really serious at this point in the introduction, telling us to watch the way Laughlin looks at Taylor in this movie, and pointing out that he went as far as to give her top billing in the Billy Jack sequels. “It honestly breaks my fucking heart.” Great way to prime us for the movie.”

Now the soldier sent me this movie a couple years ago after watching it 30-40 times. He had to… really he did. He had to watch it that many times and if you’ve read here long enough then you know he sent me some boxes over the years. Remember how I wouldn’t open them – had to let them cool? Well this movie was in one of them – he was making a statement… a profound statement when he sent it.

Someone gave him the movie (he’d never heard if it) thinking he was akin to Billy Jack  in the movie, where they were the sheriff who basically tries to keep Billy out of trouble he seems to get in. Little did they know there was a “Jean” in the soldier’s life… this is the woman, Tarantino mentions. They are still married by the way – The movie was made in 1971.

Anyhow, if you watch the movie you have to transcend what would be considered cheesy in this era and if you can do that, the movie is sublime. He didn’t watch it 40 times because it was not sublime, right? No, there is something new to see every time you watch it and it most definitely portrays the soldier and I… our natures and the nature of our relationship up to and including the final scene which is uh… well fuck it. Watch the movie if you want to know. I’ll tell you this, I have never had a finer gift in my life and meantime….