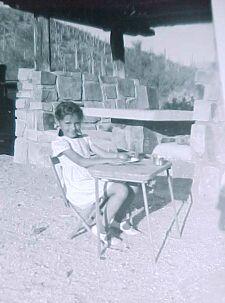 I got thinking about my mother’s best friend (and cousin). She’s been ill. I haven’t heard an update in more than a year so I searched and found out she had passed.

I was surprised that her daughter (my cousin) didn’t tell me. She’s kept me informed of her mother’s health, intermittently.

Imagine my shock when I searched for my cousin and found she had also died. Oh man.

It’s been a couple weeks since I learned these women are gone. Today, I realized that everyone on my mother’s side is now dead.

I was always considered to favor my father as far as my appearance goes. But as I’ve gotten older, I look more and more like my mother. I realize I carry her legacy.

I say this because these two girls grew up together in the Arizona desert. They both manged to find Italian Catholic men and marry them. This was not the easiest thing to do in that area at that time. Once married, they both had four children in short order.  Well, my mother had five; I had a sister that died.

These girls lives were completely intertwined right up until their stories and their families took different turns.  In whatever case, here I am, realizing I made the same life choices they did.

That’s my mother in the picture.  She’s a double Aquarius. Not too surprising, is it?

I have really good memories of these two women who just passed. They were part of the reason I’ve decided to teach kids.  They both worked with children and it satisfied them. I suspect it will do the same for me.

Can you look down you line and see how you got where you are?