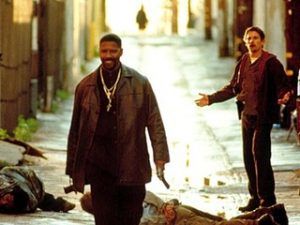 “To protect the sheep you gotta catch the wolf, and it takes a wolf to catch a wolf.”
–Alonzo Harris, “Training Day”

Moral values are represented most simply in the natal chart by the 2nd house. The 2nd house is also possessions, what you own and have worked for personally. This covers both the tangible, things, and the intangible, what is important to you. My second house cusp is in Virgo and I find myself always on the lookout to further define morality, to organize it. I’m often thinking of ways to define and categorize people into sets. “There are two types of people…” is a frequent intro in my self-talk thinking. Clearly there are more than two types of people, but this is how I break things down, sets and subsets.

I really like the Dungeons and Dragons rubric for moral and ethical alignment. It has nine designations with combinations of good, evil, neutral, lawful and chaotic. I watched a movie this weekend where a lawful good character and a morally ambiguous character (indeterminate to the audience) competed. I decided once again that I could boil this down to two categories: those who are conscious of their moral/ethical stance and those who were not conscious or who are mistaken in their self-assessment.

If you don’t know the rules of the game you’re playing you’re going to have a distinct disadvantage in competition with one who does. You have to know your role and understand your possible moves. Where is this in astrology? Well, we can examine values and morality, which is helpful, but consciousness of self is primarily represented by the Sun, its position and aspects. Who you are is one thing; how much you know about it is another.

For instance, I have a fairly well-aspected Sun but Neptune is involved. I could be confused, can become confused. I had better be mindful of this possibility. My Sun sextiles my Moon in Capricorn. One way I address confusion is that when something feels off (Moon), I consult a Saturn figure.

By examining your Sun you can figure out how to best “know yourself,” or as Jung said, “To make the unconscious conscious.”

Are you conscious of your own moral/ethical alignment? Are you certain? What’s the condition of your Sun?