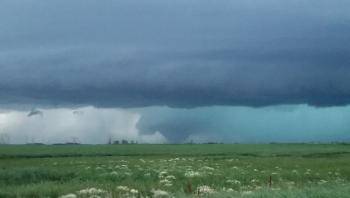 I had the strangest thing happen yesterday. I was getting gas.  I had my wallet stuffed with cash. STUFFED. I also had this restaurant gift card, in a folder, placed alongside the paper money. I put it there so I would not lose it. Never mind why I was carrying all this cash. We had a tornado threat yesterday. It didn’t manifest, but it was windy.

I stopped to get fuel and when I opened my wallet to get my credit card out, all the cash in my wallet slid out off the slick paper carrier of the gift card and it went FLYING.

You have to picture this. I am talking about $400 in twenty dollar bills, mostly. And some ones and a couple fives and a ten, but it was mostly twenties. I’d gotten the cash from an ATM. More than one ATM, obviously. I’ve been carrying this cash for awhile.

So the twenty dollar bill blew all around, tumbling away. I could not chase them. Seriously. I could even think about chasing them. I was squatted down between my car and the pump, stepping on as many as I could. They’d dropped straight down, see. And then the wind picked them up.  So I was squatted down, watching them blow and scatter in a broad pattern.

The reason I couldn’t chase them was because I am crippled, some of the time. Yesterday, I was particularly crippled and I just couldn’t stand up, never mind, try to run after these bills. They were going and going to be gone.

But then some man on the other side of the pump, started chasing them. Found money, right? There were so many bills.  It was like a really lucky day for someone.  But do you know that guy gathered all the money (he could find) and brought it back to me?

“I don’t know?” I said, still trying to hold on to the wad of cash under my feet and crumpled in my hands. I was so crippled, I was struggling to stand and open the car door so I could throw the money on the passenger seat, out the reach of the wind.

He peered under the car and handed me three more twenties.  “Is that all?” he asked. It was so windy.

“I don’t know,” I said. By then, I was on my feet, with the cash in the car. I walked around the front and looked under the car. “There’s another under the tire,” I said.  He reached and grabbed it. “You better keep that,” I said. “It’s the very least I could do. Look how much you saved me.”

He went back to his pump and I got all the money into the car…it was all in a messy pile. I found a ten dollar bill.

“No ma’am. That’s just not something I could do.”

What do you make of this?