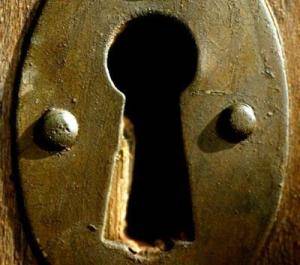 My husband is good at getting through a keyhole. He works well with narrow bands of opportunity and impossible odds. He gets around impediments by careful planning and contemplating something down to the fine hairs. He’s about to plan a mission that should be impossible and have it be successful.

My method is completely different from his. I live with an eye on the horizon and when I see a window or a door open, I leap through it with less than a second of thought, land on my feet and then start living in the new environment, whatever it might me.

Both of us are vitally alive and very effective and our tendencies are boldly drawn in our charts. We both have Mars in aspect to Mercury (sharp mind) but his is associated with Saturn (slow and methodical) and mine with Jupiter (“Life favors the risk-taker).

At the moment we’re considering a move and I told him point blank I’ll jump off the cliff with him but he’s got to do the planning himself. I just can’t go that slow but I surely appreciate the fact he can. Between the two of us we can get almost anything done.

I should say, I don’t always land well but I also don’t care because it’s all adventure to me anyway.

He doesn’t always land well either but it is always clear he’d have landed even worse had he not planned so in the end we’re both satisfied.

Generally speaking, how do you get from here to there?