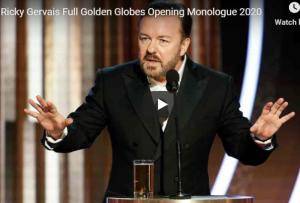 By now, you’ve probably seen Ricky Gervais’ opening monologue at the Golden Globes. I don’t think there is anyone, unaware of the divide in this country; in the world, for that matter.  This is old, UN-fake news!  But if you’re still assuming that people on your side of the line, see what you see, when they turn on the internet, think again.

Case in point, I was talking to my friend and neighbor, yesterday.  We see eye-to-eye, or close enough, on most issues.  She asked me if I’d seen the Gervais’ monologue.

“Well, yeah. I saw it as soon as I woke up. It was the top of the news; I watched it at four in the morning…”

I asked her what she was hearing about it, in her circles which are slightly different than mine. She quickly relayed the prevailing opinion in her group.

It’s interesting because things like this are always framed, “Everyone is saying…”

That’s probably an inappropriate response but I did, laugh.  On her end, I think she was just surprised. She’s not even considered the perspective I was exposed to.

Many years ago (at least ten years ago), my husband predicted the United States would become factionalized.  I believed this has happened and it’s tied to MERCURY.  You know. Mercury, which is akin to a flyover planet for many!  Here’s the monologue:

Then yesterday, beloved, regular, “soup”, wrote about the country coming together in the Random Thoughts thread in the forum:

As divided as this country seems to be right now, go back on memory…when/if the shit hits the fan we are known for pulling together in a crisis…”

I was struck by this because it’s not at all fashionable to suggest such a thing.  Could she be right?

Last week, I sent a newsletter about families pulling together because someone in the clan is seriously ill.  They’re setting aside their differences, so they can avoid this:

Back on topic, working with people from all over the world who have different beliefs, it’s necessary that I keep in mind, its not only possible, it’s likely my client don’t read the same spin, that I do.

This is okay, because I am an authentic person with an authentic desire to support my fellow men and women. It’s in my blood, you know.

These are my real (Capricorn) thoughts (Mercury)/

What do you say?