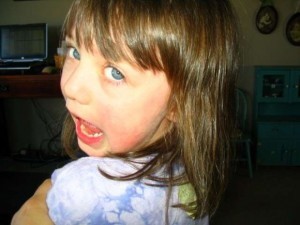 We all have cell phones here, even BabyJane, but most of Jane’s friends don’t have cell phones yet so they call her on the house phone. I never answer the house phone because 99 times out of 100 it’s either for Jane or it’s a telemarketer. Sometimes I am forced to answer the phone because sometimes Jane’s friends don’t just call and leave a message, they call ten times till someone answers. So this morning I picked up. “Is Austin there?” said a babyish voice. Thinking one of Jane’s friends had her number mixed with Austin’s (she has a friend named Austin) I said in what could be construed as a condescending mama voice, “No, this is JANE’s house.”

I don’t normally use the mama voice but I’m not coffeed up and was highly irritated. I didn’t want the highly irritated part to shine through so I thought it was the way to go. She said, “oh… okay.” Then I got off the phone and listened to the three messages. Clearly it was an adult woman who happened to have a young-sounding voice. Well now I feel like a dick since she probably thought I was being snarky. Criminy. Mercury retrograde snafus go both ways.

Are you having Mercury retrograde communication misfires?