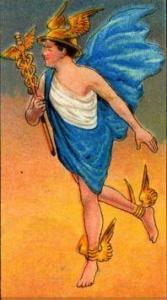 Mercury will turn direct near midnight on July 31st. There may be some drama with this, considering the shift occurs less than one hour after the brilliant new moon In Leo.  Most of us will sleep through this, but when you wake up on the morning of August 1st, look for it to be a “special” new day.

It’s notable that Mercury turns direct at 23 degrees, Cancer.  It’s a sensitive point because Saturn and Pluto will crush this degree in 2020.

I don’t say that to scare you. Just pay attention if you have planets that will be affected because there’s a good chance you’ll get a clue around what’s coming up. I don’t know about you, but I don’t like to be blindsided if I can help it!

I realize this is post is pretty heavy for a Mercury retrograde piece, but hey!  The planet is turning direct in tight opposition to Pluto in Capricorn.  This is the way this has to read!

On the upside, Mercury will clear Cancer on August 11th, to join the stellium in Leo. This will be fun!

It will be particularly relieving for Mercury-ruled, Gemini and Virgo and people with planets in the late degree of Cancer. These people have been weighed down by Pluto in Capricorn which can be seen from at least one angle, as intractable crap!