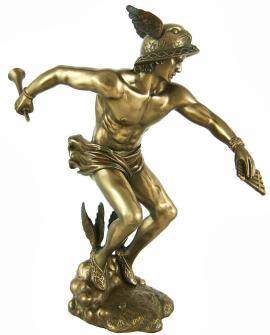 Mercury in Cancer will turn direct on Sunday morning, July 12th.   You can expect things to quicken, almost immediately. It’s because once the planet reverses course, it will be closing a square with Mars in Aries. I think this will be super interesting to watch.

Mercury will turn direct at 5 degrees Cancer up against Mars at 8 degrees Aries.  In general, Mercury moves twice as fast as Mars. But in this case, Mars is already running. Mercury has start off slow.  Consequently, Mercury not catch up to square Mars exactly, until the end of the month.  The 27th, to be specific.

For some reason, I think this is comical. Mars in Aries is anything but fearful. He just forges ahead. But Mercury has a message to deliver, always.  Rain, sleet, hail of snow, he’s going to get this work done!

Watch Mercury-ruled Gemini and Virgo this month. I bet you see them striving. Their effort may very well be heroic.

For everyone else, yes it’s okay to sign and whatnot, but we will still have four planets retrograde… and more to come. You can track this here:

For the record, Mercury is already squaring Mars. Post the exact aspect on July 27th, the square will be maintained into August.

Are you a Gemini or Virgo?  Are you feeling this? The urge to kick some butt?