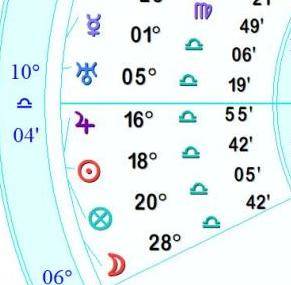 I filled a report order for the gal whose chart is pictured, in part.  Is she going to have a Saturn transit or what?

It’s really interesting to watch this stuff from my vantage point.

For example, I had client a couple days ago. She and most of her family had planets in Cardinal signs at the early degrees.  She was feeling rotten. I was able to tell her that she’d be clear by the time the holidays rolled around. That was pretty good news!

But seriously, no one in her family had anything significant in the later degrees of Aries, Cancer, Libra or Capricorn.  She only needs to get through the summer and voila!  That’ll be that.

In contrast, this person and other people with stelliums in Cardinal signs, or a heavy emphasis on the Cardinal signs in any configuration and going to have dig in with Saturn in Capricorn.  If you know how to work with this, that’s fine. If you are finding it daunting, satori and I put together a workshop on this – Saturn In Capricorn – Let’s Get Real.

Knowledge is power. It will save you a tremendous amount of effort and grief as well as set you on a productive path.

Are you facing a massive transit of Saturn in Capricorn like this gal?  How’s it going?