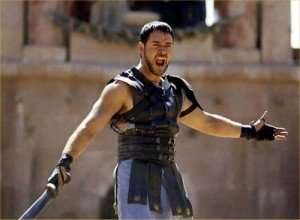 What if you have Mars in aspect to Saturn or some other harsh signature in your chart?  And what if you’re a woman?

I have a client with an wicked opposition in her chart. She’s also got Venus in Taurus in the 7th house which is a strong placement.  But this Mars. Mercury, Saturn, Pluto gash ‘cross her chart dominates. When she interacts with people, she easily slips into a dynamic that makes me think of two Gladiators, squaring off.

This is difficult for her not only because of the Venus placement but she’s also got a Pisces Moon!  Can you imagine? Yesterday she asked me if she was going to get over of get rid of this and I had to tell her no. You can’t have something like that in your chart and not have it play. However it can managed.

My husband has a similar aspect in his chart. Most of your know he is a consummate soldier and an ex-green beret. This gal needs a similar outlet and she has the foundation for this already laid. She’s got to find expression for that opposition, at work most likely, and then not bring the work home.

I explained to her how disastrous it would be for my husband’s love life if he brought his prowess home. I mean his physical prowess as well as his keen, cunning mind. If he beats his wife and plays psych warfare on her, what do think is going to happen? He’s not going to have a wife!

You see the key here. If you have something like this in your chart it is up to you to manage it. No one can do it for you. My husband is very careful. He won’t give me a massage because he’s afraid he might break a bone. He goes out of his way not to scare me because he certainly is frightening.

This gal has to use (and not use) her prowess in a similar way. I say it’s possible – this is what Saturn is for, eh? With Mars and Saturn mashed, you must take command. Not of me, but of yourself.

Do you have a harsh signature like this in your chart. How do you work with it?